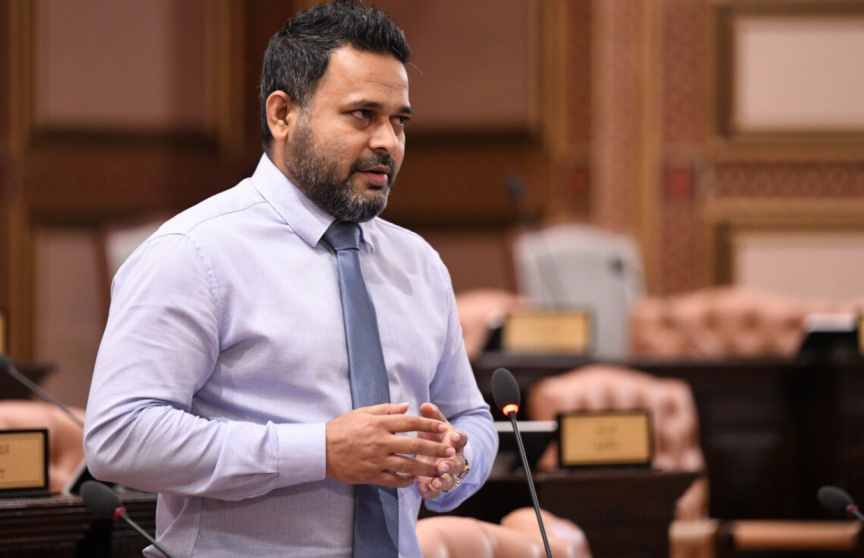 Naifaru MP Ahmed Shiyam accused parliamentarians from ruling Maldivian Democratic Party (MDP) on Tuesday of rejecting motions that they find disagreeable with blatant disregard for the interests of the people.

Shiyam, the deputy leader of opposition Progressive Party of Maldives (PPM), made the allegation during the debate on a resolution submitted by Deputy Speaker, North Galolhu MP Eva Abdulla regarding challenges in executing the responsibilities of women’s development committees.

Shiyam said that the role of women wasn’t any less to men in fisheries sector.

He said that the loss or profit from a fishing boat didn’t involve just the fishermen themselves, and that any loss of income from fishing affected multiple families.

“Fishermen from the south are there in Kooddoo unable to sell their fish. We must get up on our feet here and talk about solving this issue. When an honorable parliamentarian submits a motion involving this, it shouldn’t be kicked out of here, if you are to serve the people with good intentions,” he said.

Shiyam was referring to an emergency motion submitted on Monday urging authorities to address the concerns of local fishermen over the fishing quota.

The motion was rejected with a vote of 41-9.

Emergency motions submitted last week, one urging humanitarian assistance to Maldivians residing in neighboring Sri Lanka, and another regarding a diesel shortage, were also rejected.

Shiyam said MDP decided how it would vote, before motions are presented.

“They come in the morning having already decided what to do. So it would be best if honorable MDP parliamentarians refrain from speaking of the people,” he said.

Parliament Speaker, former President Mohamed Nasheed, too, urged parliamentarians on Tuesday to allow room for debate, despite difference of opinion.

MDP holds a supermajority in the Parliament with 65 seats.

Motion over lack of fair price for fish accepted

MP Shiyam: We need an audit on Shahid’s expenses

Disruption to weigh fish despite revocation of limit