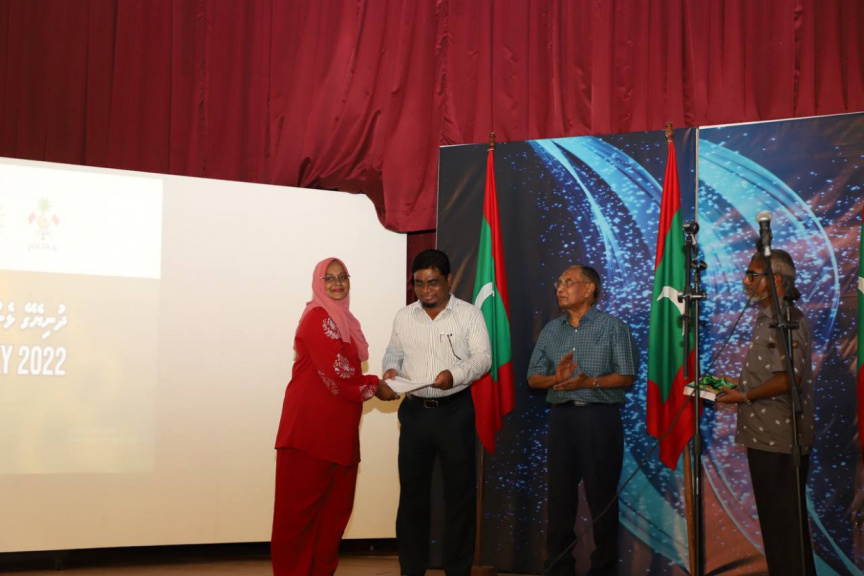 A special ceremony was held to mark World Poetry Day on Monday, March 21, 2022.

In a special ceremony held in Izzudheen School, poetry was presented in Dhivehi language, and seven languages from India. As part of this, the Chief Guest Dr. Mohamed Gubaad Aboobakuru presented a passionate, romantic piece in Dhivehi.

Additionally, Abbas Ibrahim, the President of Liyuntheringe Gulhun – an organization that promotes Dhivehi literature - addressed the gathering, as well as presented a poem written by Abdul Rasheed Hussain.

The President of Dhivehi Language Academy Dr Ashraf Abdul Raheem also spoke at the gathering, stating that poetry has the capability to inflict strong emotions on people.

He went on to say that irrespective of the language poetry is coming from, it can affect people’s hearts.

“Poetry is something that affects people’s hearts. No matter what language the poem is in, it brings happiness to the listener.”

In addition to this, prizes were awarded to the winners of the poetry competition “Lhenveriyaa 2022” held by Liyuntheringe Gulhun. Chief guest Gubaad distributed the prizes to the winners.

Meanwhile, two books were released in this ceremony. The first was Roanuge Hassan Manik’s “Theyhatti” – a poetry book that was officially released by the Minister of Arts, Culture and Heritage Yumna Maumoon.

The second book was ‘Lhenveriyaa 16” – a poetry book compiled by Lhenveringe Gulhun. The book was launched by Dr. Ashraf. Copies of this book were gifted to all attendees of the ceremony.

'Choose to communicate in Dhivehi in all settings'

Sonee Home launches Ramadan sale; up to 75% off