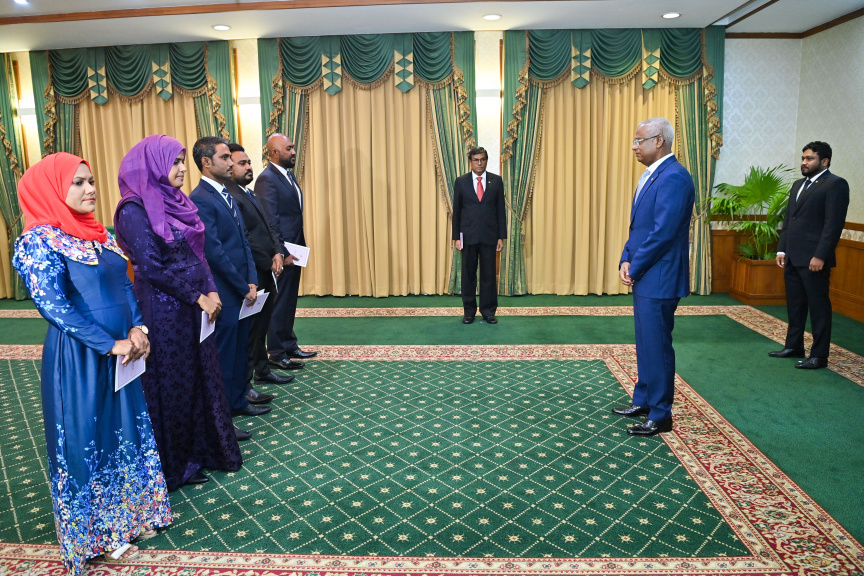 During a ceremony held at the President’s Office, the members were sworn in by Chief Justice Ahmed Muthasim Adnan.

The newly sworn members of ACC are:

Additionally, The president and vice president for the Anti-Corruption Commission was also appointed.

While Adam Shaamil is the new ACC President, Abdul Salaam is the Vice President.

Prior to his appointment to ACC, Adam Shamil served as the Director, Investigation and Legal Department, of the Children’s Ombudspersons Office. He holds a Master of Laws from the Maldives National University (MNU).

Meanwhile, Abdul Salaam was serving as a Senior Investigation Officer at the ACC. He completed his Bachelor of Shariah and Law from MNU.

Before this appointment, Thoha Mohamed served as a member of the President’s Committee Investigating Public Housing Schemes and was a Partner and Senior Legal Counsel at The Litigants LLP. He holds a Bachelor of Shariah and Law from MNU.

Additionally, Shazna Hashim served as the Director of Finance at the Ministry of National Planning, Housing and Infrastructure. She completed her Bachelor of Science in Commerce (Accounting) from Al-Azhar University, Egypt.

Shiyama Mohamed served as the Deputy Director at the Elections Commission (EC) before her new appointment. She holds a Master of Shari’ah from Villa College.

The President on February 23, forwarded his selection of candidates to the Parliament for approval.

ACC was vacant until now, with the resignation of all five members composing the commission.