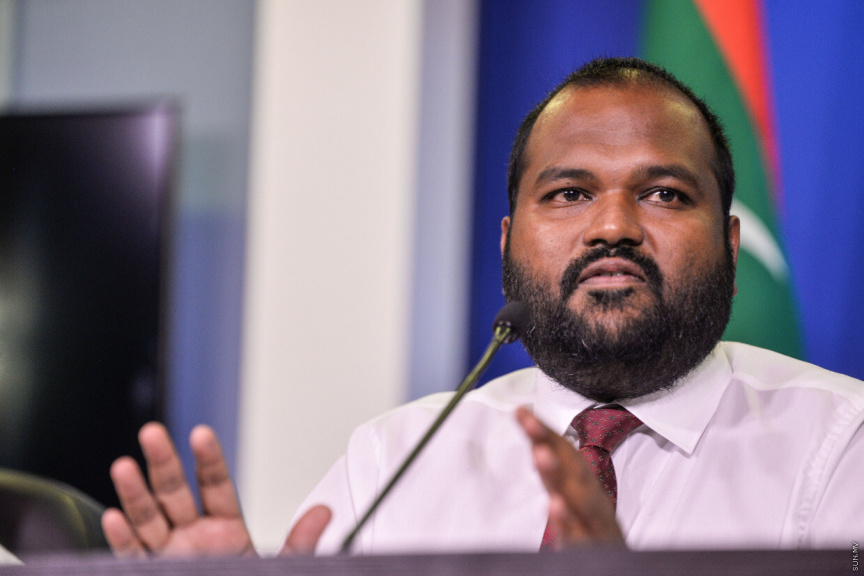 Maldives police confirmed on Sunday that former Tourism Minister Ali Waheed – who fled to the United Kingdom last year, despite being on trial on charges of sexual violence against multiple women in Maldives – has yet to be arrested, three days after an Interpol red notice was issued for his arrest.

Interpol issued the red notice for Ali Waheed’s arrest on Thursday, March 3, at the request of Maldives police.

A police spokesperson told Sun on Sunday afternoon that Interpol was yet to inform the Maldives police of Ali Waheed’s arrest.

In a tweet the day the red notice was issued, Ali Waheed – who described the charges against him as a ‘frame job’ - said that he would not surrender in face of injustice and would not fall on his knees before cruelty.

“God willing, justice will prevail. The frame job will be uncovered and I will seek compensation for this unjust abuse. I will prove my innocence to the world. You cannot shake my stand against the government,” he said.

He initially had a travel ban order against him, but the Criminal Court temporarily released his passport and allowed him to travel overseas for medical treatment on February 9, 2021, despite requests by the Prosecutor General's Office not to release his passport and grant him temporary travel papers instead.  The court made the decision based on a surety agreement signed by his close associate, then-State Minister for Sports Assad Ali (Adubarey).

He failed to return to Maldives despite the fact that the four-month period granted by the court for his travel overseas expired in June 2021.

Prosecutor General's Office had submitted a motion to seize Ali Waheed's passport in June, but Criminal Court Judge Hassan Saeed rejected the motion in July 2021, citing lack of reason for the seizure of the passport.

Once in the UK, Ali Waheed had filed a motion asking the Criminal Court to allow him to attend his hearings remotely. The motion was allowed by Judge Hassan Saeed despite the objections of the Prosecutor General’s Office, which argued that holding a hearing via video conferencing in a criminal trial with the defendant in a location outside of Maldives’ jurisdiction was in violation of Criminal Procedure Code, and that the court would not have the jurisdiction to penalize the defendant, even if he acted in contempt of the court.

The decision was contested by the Prosecutor General’s Office with the High Court, which dismissed the appeal, citing lack of judicial and legal basis to hear the appeal.

The Supreme Court sentenced Ali Waheed to two months and 12 days in prison for contempt of court in August 2021, after he failed to appear at the appeal hearing.

He was also detained by British authorities for overstaying his visa in August 2021.

An Interpol red notice for his arrest was issued last week.