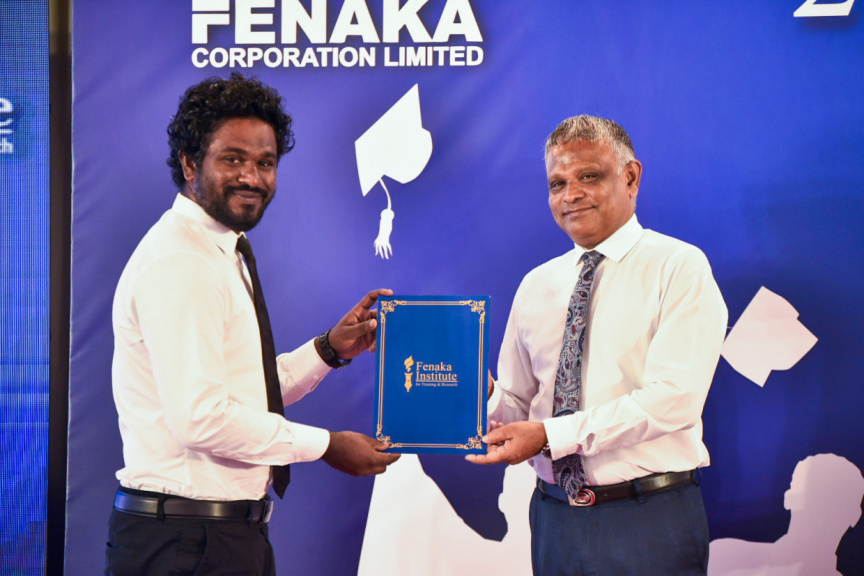 23 students have graduated from the Fenaka Institute operated by the state utility company Fenaka Corporation.

The students who completed Certificate III in Engine Repair and Maintenance were presented with their certificates during the convocation ceremony held on Saturday evening.

The 23 students who completed the course include 21 males and two females.

Fenaka Corporation states that the Fenaka Institute aims to train people for positions in power plants across Maldives.

The corporation said that students who enroll in Certificate III in Engine Repair and Maintenance are taught what they need about the repair and maintenance of diesel engines, and receive practical experience in the field.

Students who took part in the course received a monthly allowance of MVR 3,000.

She described the Fenaka Institute as “the sweet fruits from the large trees that grew from the seeds planted” by Fenaka Corporation’s Managing Director Ahmed Saeed Mohamed.

Faseeha said that the success of the Fenaka Institute cannot be erased from history.

“MD Ahmed Saeed Mohamed has become a jewel of a leader who is unparalleled in Fenaka’s long history. It was MD Saeed who determined that this company’s most valuable resources aren’t large generators and other capital assets, but the company’s employees,” she said.

Speaking at the ceremony, Saeed said the skills and knowledge gained by Fenaka Corporation’s employees had improved the quality of services provided by the company.

Saeed said that the Fenaka Institute was working on two researches, which they hope will gain recognition from top international universities.

“We are conducting two researches. We will gain immense happiness the day two or three universities of good international repute recognize the researches and announce it to the world,” he said.