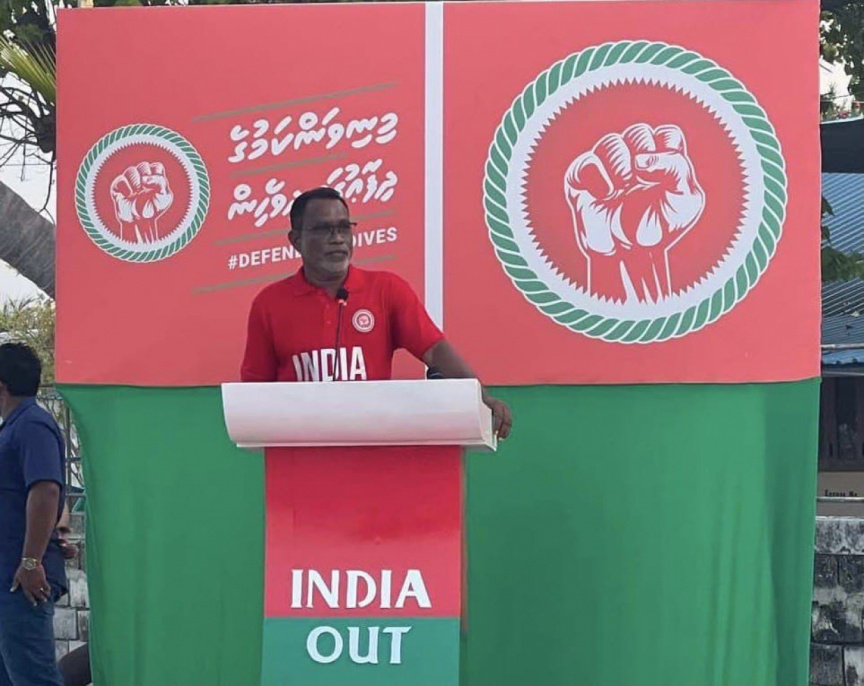 Adhurey had remarked this whilst speaking at a rally held at R. Meedhoo, as part of the opposition coalition's 'India Out' campaign this evening.

In this regard, Adhurey said that the recently held Komandoo parlimanetary seat by-election has clearly shown MDP's size. He added that MDP held its National Council and addressed amending laws to make 30 percent of votes enough for presidency in a rush, is because they know their size.

At an MDP National Council meeting held last night, MDP's Leader, Parliament Speaker Mohamed Nasheed had stated that amending the laws to allow the candidate securing 30 percent of the votes in a presidential election to be elected as the president can be useful.

With reference to this statement, Adhurey said that MDP's size today is 30 percent – adding that they are trying to amend the laws make 30 percent of votes enough for presidency is due to this reason.

"Even if laws are amendended to make 30 percent of votes enough for presidency, MDP will not come to power. Maldivians are more wide awake than that. This is evident from Komandoo by-election," he had said.

Stressing that MDP's size is eveident from Komandoo by-election – Adhurey said that PPM had contested in the election with sincererity and honest efforts. He said that despite this, MDP had put all the resourses of India, the governemnt and all the wealthy people in the Maldives to the constituency without considering the consequences.

"But the result is, even with all those leaders and the government together, they got 46 percent. This shows that the current adminstration does not have the support of Maldivian people," he had said.

As per the current laws, a candidate can only be elected for the post of president if 50 percent of votes are secured in the elections. If 50 percent of the votes are not secured by a candidate – the two candidates with the highest votes will have to compete in a second round of voting.

Markets to be developed in Male' specialized to females