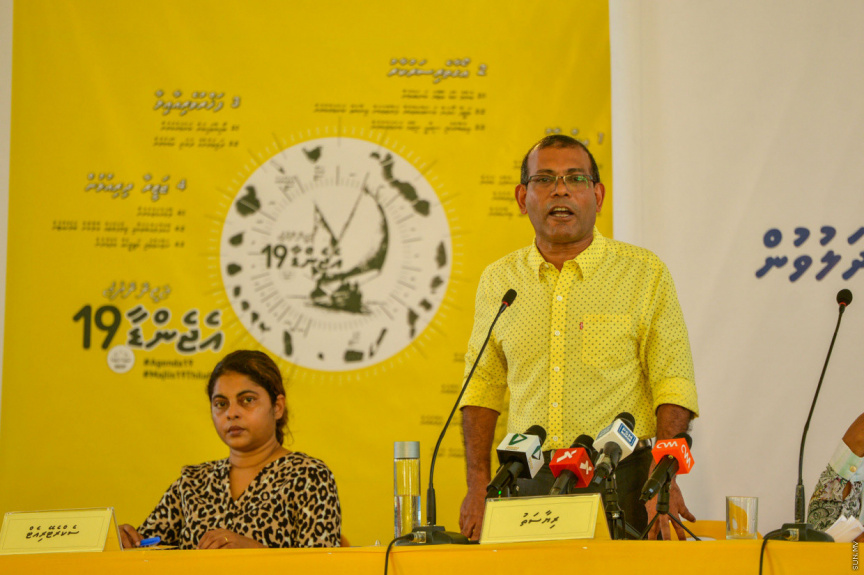 MDP leader, former President Mohamed Nasheed said on Saturday that MDP must remain in power for 10 more years to improve the life of the Maldivian people.

He made the comment while speaking at a campaign event for MDP’s candidate for the Komandoo by-election, Mohamed Rashid, held in Sh. Foakaidhoo on Saturday evening.

“Maldivian Democratic Party exists for one reason only; to seek ways to improve your daily life,” he said.

Nasheed said that organized political activities require an improvement in the situation of the people, and that he wishes the people to live a happy life.

Nasheed said he does not believe development comes from “concrete” alone, and that it is linked to personal growth and change.

“It’s misguided to believe our people can progress, that their daily life can change, from concrete buildings. A boulder rock harbor, a quay wall, some concrete – this is not the development we speak of,” he said.

Nasheed said he wishes to see an increase in disposable income of the people, and that the minimum wage was introduced for that purpose.

He also criticized opposition leader Abdulla Yameen Abdul Gayoom, stating that the only policy the former president had during his administration was to concentrate everyone to one place.

The highly competitive Komandoo by-elections is scheduled to be held on February 5.

President Ibrahim Mohamed Solih had also been scheduled to join Nasheed in Saturday's campaign event, but had to cancel the trip after he tested positive for COVID-19.