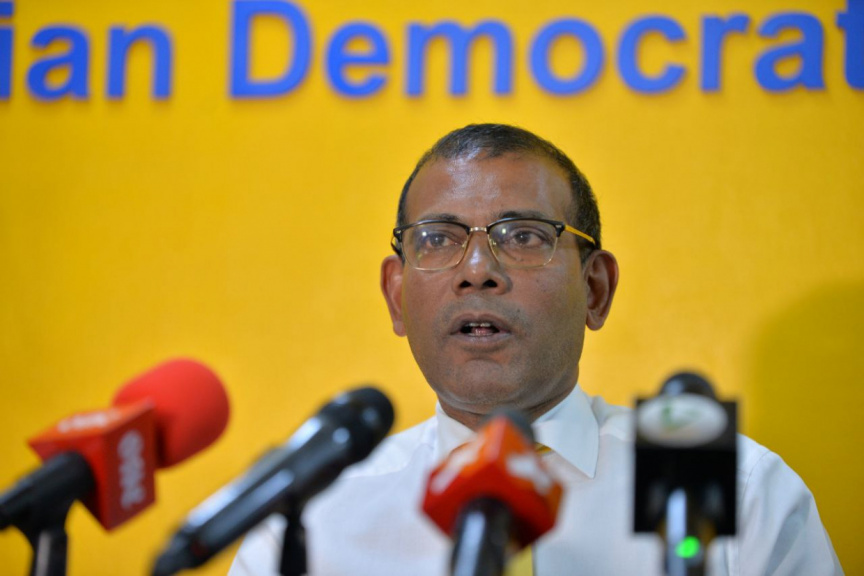 Maldivian Parliament Speaker, former President Mohamed Nasheed states he does not see a bigger role for China in the Maldives.

He made the comment in an appearance on an episode of Sri Lankan media outlet, Daily Mirror Online’s On Fire with Easwaran Rutman last week.

When asked whether he saw China playing a bigger role in Maldives, Nasheed defended Maldives’ ‘India First’ policy and said India was a natural ally to the island nation.

“I don’t see that there is a bigger role for China. I think our cultural affiliations, our historical ties, our close proximity in the Indian Ocean... And I think the ‘India First’ policy must remain as a foreign policy of the Maldives, and it is,” he said.

Nasheed said it was a policy MDP would always stick to.

He was also asked about the ‘India Out’ campaign, led by the Maldivian opposition leader, former President Abdulla Yameen Abdul Gayoom.

Nasheed called it a misguided and unpopular movement.

“I think it's very misguided, very unpopular. For whatever reason, if President Yameen feels that he can whip up an anti-Indian sentiment in the Maldives. A xenophobic nationalistic tendency. But I don’t think the people are buying it. I don’t think there’ll be popular support for any movement against India or for that matter, any country. I think it’s very misguided. President Yameen must stop it,” he said.

Nasheed, who survived as assassination attempt linked to violent extremists last year, expressed concern over the rise in extremism across the world.

“I think this is a very serious issue for all our governments,” he said, urging greater collaboration to combat extremism and terrorism.

“Yes, they are. The President has now formulated a counter-terrorism unit in the President’s Office and it is now coordinated. The police and the military are both engaged in the work and I believe that we are addressing the issue,” he said.

Nasheed gave the interview during an official visit to Sri Lanka last week to attend a session of the Sri Lanka National Youth Parliament.