Surgery scheduled for Laishaan-stabbed in eye, hopeful for seeing 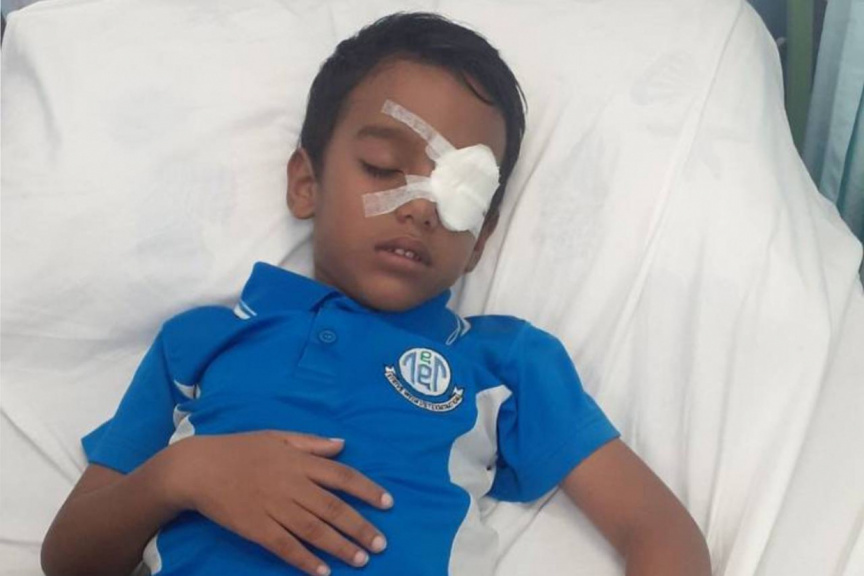 Four-year-old Laishan was accidentally stabbed in the eye. (Photo/ Family)

The family of young boy from Th. Thimarafushi who was accidentally stabbed in the eye revealed that his surgery has been scheduled for Monday, January 17, and there was a high possibility of regaining sight.

On December 16, 2021, in an accident, four-year-old Ibrahim Laishaan Mohamed was accidentally stabbed in his left eye, and there was a great fear he might lose his eyesight.

Following the incident, the youngsters family appealed to the public for assistance to fly abroad for treatment.

Speaking to 'Sun', Laishaan's father Mohamed Imad revealed that they received a lot of support from the public, and he expressed gratitude for their assistance.

He further revealed that the surgery will take place at 'Arvind Eye Hospital' in Madurai, India.

"Now we need prayers. Doctors said that there is hope he will see."

Recounting the events leading to the incident, Imad said that it had been two days since the lock on the main door of their home broke, and they needed to insert an object into the lock in order to turn it.

On that day, he had picked up Laishaan from school on his bike and dropped him off in front of their home, telling him that his mother will be here in a little bit. Imad said that since his wife was walking down the road so he started his bike and left.

However, before he could go much further, his wife called and said that Laishaan had been stabbed in the eye.

"Actually he was trying to use a small knife to turn the lock but the knife accidentally slipped and hit him in the eye. I guess he saw us turning the lock so maybe that is why he tried to do that."

Imad said that immediately a lot of blood came from Laishaan's eye, and the couple rushed him to nearby island Veymandoo. From there, after doing tests, they recommended flying to Male'.

The knife landed in the middle of Laishaan's left eye, and since the eyeball was sliced, IGMH had stitched it and advised them to fly abroad for treatment as soon as possible.