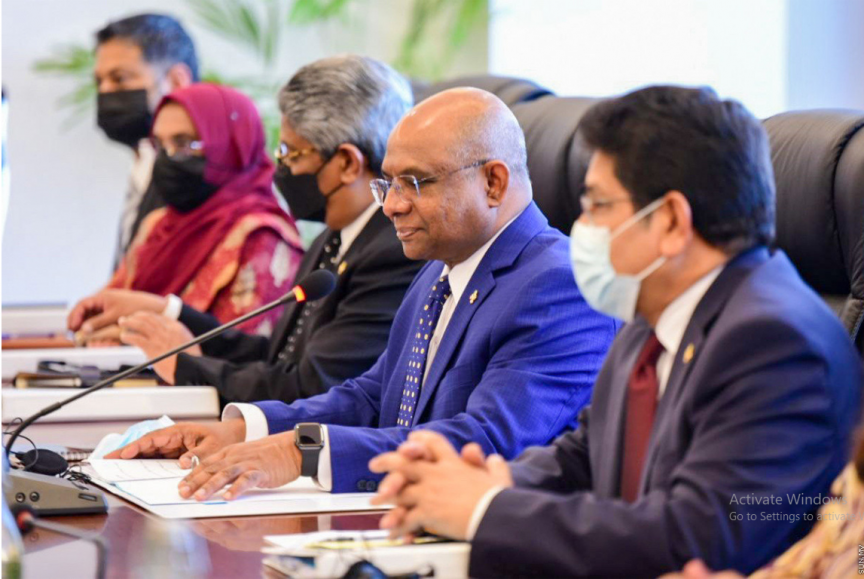 Minister of Foreign Affairs Abdulla Shahid stated that the National Stadium in Hulhumale being built with Chinese aid will symbolise commemorating the 50th Anniversary of diplomatic relations between Maldives and China.

The remarks were made during the ceremony held to sign five key agreements between Maldives-China.

The Maldivian government granted the project to build an international stadium in Hulhumale in 2019 to China Machinery Engineering Co (CMEC).

Additionally, Minister Shahid stated that since human resources and youth development is a key priority area for Maldives, "during my discussions with the State Councilor, I briefed him on the progress on the ongoing project for the development of the National Stadium in Hulhumale’"

Moreover, the foreign minister expressed gratitude towards China for the "generous assistance it had provided to the Maldives in the recent past, including the China-Maldives Friendship Bridge, the Housing Units in Hulhumale’, and the expansion of the Velana International Airport, to name a few."

Shahid also highlighted the support extended by China to combat the community spread of COVID-19 in Maldives in the form of 200,000 doses of the Sinaphoram vaccine and other medical supplies.

During China’s Foreign Minister Wang Yi’s trip to the Maldives, a total of five agreements was signed between the two countries. They include agreements pertaining to the provision of MVR 968.3 million in grant aid, maintenance of Sinamale’ bridge, a project for the establishment of additional outlets for seawater desalination in five islands and services of an Ophthalmic Center.