Police: Priority is given to have female officers arrest women 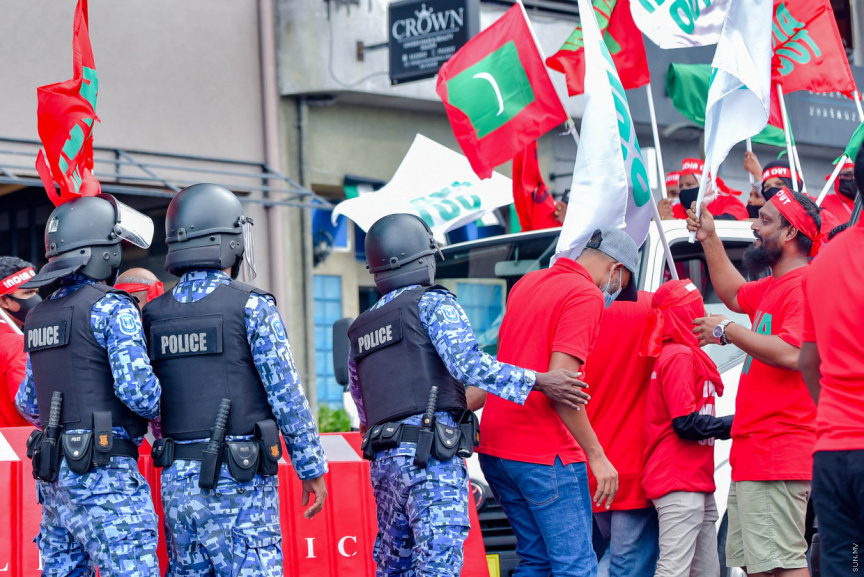 Maldives Police Service has stated that a priority is given during protests and rallies to have female officers arrest women.

The statement from Police comes at a time a video has gone viral showing a male officer trying to arrest a woman during the opposition coalition’s ‘India Out’ protest held in Male’ City on Friday evening.

In a statement released tonight, the Police said that officers follow the Criminal Procedure Code in arresting persons during protests as well as in other circumstances.

“In this regard, this Service prioritizes having female officers take part in the arrests of women,” the statement read.

The Police also stressed in the statement that they would take any action deemed necessary at that time within the confinements of laws and regulations, for law enforcement purposes and the protection and security of the public.

In reference to the opposition coalition’s protests being held in Male’ City as of recent, the Police said that the protests are being held in violation of the right to assembly.

“Having taken note of public transportation being disrupted, with the buses traveling between Male’ and Hulhumale’ being stopped on the road in addition to repeatedly encouraging unconstitutional acts – the Police are investigating the cases of such persons,” they detailed.

They also noted that the policy they follow in disbanding protests is to use adequate force for the circumstance, or a force lower than that.

Police also said to have taken note of some participants in these protests attacking officers, damaging government property in addition to obstructing the operations of relevant government authorities.

“We will investigate any complaints submitted within the system to submit complaints regarding the use of excessive force by the police in arresting a person and in any other matters,” they added.

On this note, the Police requested any such complaints to be submitted to the National Integrity Commission, or the relevant authority.

Twenty-nine people were brought under police custody during a protest held by the opposition coalition as part of their ‘India Out’ campaign on Friday – out of which two were arrested. The two individuals arrested were granted conditional release tonight, by the Criminal Court.