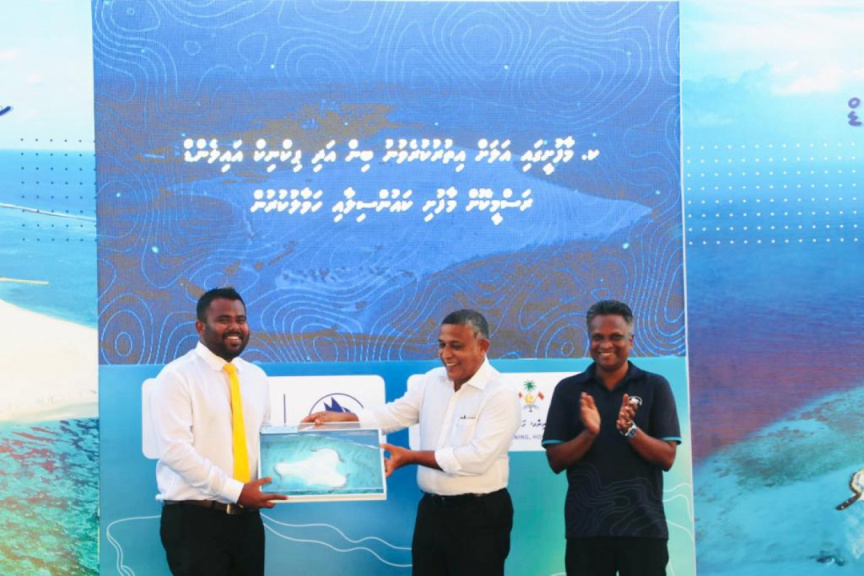 The reclaimed land as Maafushi Picnic Island has been officially handed over to K. Maafushi Council.

Maafushi Picnic Island was reclaimed subsequent to the complete erosion of the inhabited island, Vahmaafushi, north east of Maafushi during the tsunami. The inhabited island spanning two hectares was popular picnic destination amongst residents from Maafushi, Male’ and other neighboring islands.

Planning Ministry contracted the physical works on the reclamation of Maafushi Picnic Island to Maldives Transport and Contracting Company (MTCC).

Maafushi Picnic Island was handed over to Maafushi Council by Planning Minister Mohamed Aslam and MTCC’s CEO Adam Azim – during a special ceremony held this evening. Maafushi Council President Hassan Salaah accepted the reclaimed land on behalf of the Council. The ceremony was special guested by President Ibrahim Mohamed Solih.

Speaking at the ceremony, Minister Aslam said that Maafushi Picnic Island was reclaimed to a concept that has never been done before. On this note, he detailed that it is the first island reclaimed that is not separately connected to residential islands and beaches were included as part of the reclamation process.

In the ceremony, President Solih urged that Maafushi Picnic Island be used in a manner that financially and otherwise benefits the people.

Maafushi Picnic Island is a project valued at MVR 10.9 million. Whilst two hectares of land have been reclaimed under the project – MTCC said that they will also be carrying out coastal protection works. They added that for which the tools and materials required for the work have been delivered to the project site.

At today’s ceremony, MTCC was also contracted to build the bridge between Maafushi and the reclaimed land. Permanent Secretary Zeeniya Ahmed Hameed signed the agreement on behalf of Planning Ministry – whilst CEO Adam Azim signed on behalf of MTCC.

Contracted on a design and build basis – a bridge at the length of 137-meters will be constructed between the reclaimed land and Maafushi.

First couple to travel to Maafushi for Eid-al-Fitr