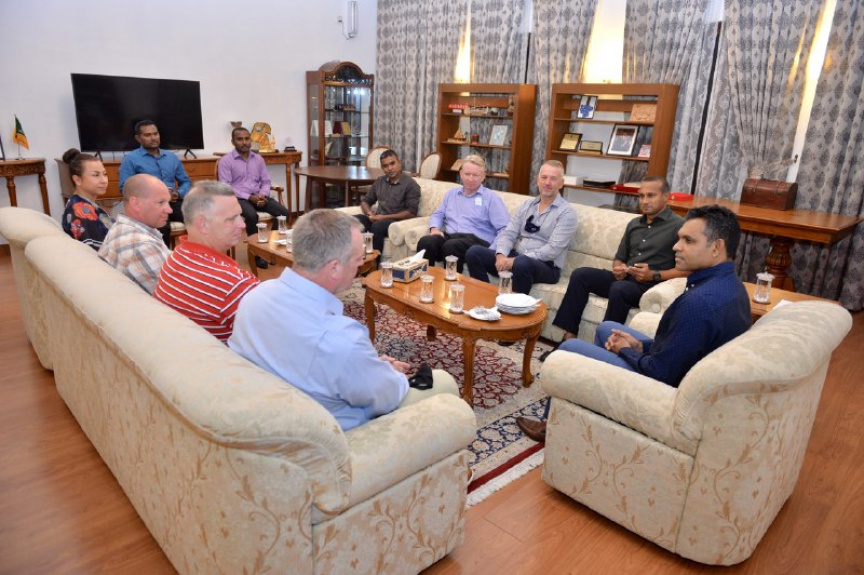 Vice President Faisal Naseem (R) meets with a delegation of officials from the Drug Enforcement Administration (DEA) of the United States and the Australian Federal Police (AFP) on October 22, 2021. (Photo/President's Office)

Vice President Faisal Naseem has engaged in discussions with delegates from the Drug Enforcement Administration (DEA) of the United States and the Australian Federal Police (AFP) regarding closing routes for drug trafficking in Maldives.

The meeting was held at Hilaaleege, the official residence of the Vice President, on Friday evening.

At the meeting, Faisal highlighted the drug trafficking situation in Maldives.

He said that the Maldivian administration gives high priority to narcotics rehabilitative programs to foster a drug-free society.

The delegation from the DEA and AFP, meanwhile, briefed Faisal on the current activities of the DEA and updates from their respective regions.

The DEA affirmed their commitment to assisting Maldives Police Service, and commended the agency for their work in counter-narcotics.

They discussed ways to improve the professionalism of police officers in dealing with the public through further training.

They also briefed Faisal regarding their meeting with Maldivian Health Minister Ahmed Naseem, during which they presented approaches for cooperate, including providing reference materials on prevention programs developed by the institutions and assisting in conveying the seriousness of the issues to relevant embassies in order to obtain additional relevant assistance for Health Ministry.

The delegation assured Faisal the DEA and AFP will work closely with relevant agencies to make the region less vulnerable to drug smuggling and trafficking. They also assured him that they were ready to assist any effort to eliminate or reduce drug-related cases in the South East Asian region.

Concluding the meeting, Faisal commended the delegation for supporting relevant agencies to enhance their services by reflecting the expertise of the DEA and AFP.

He said the Maldivian administration's policies were centered on combatting drug addiction, stopping all forms of narcotics peddling and trafficking, and providing drug-addiction treatment, rehabilitation and reintegration back into society.

He reiterated that alleviating the drug abuse problem is a top priority of the Maldivian administration.

The meeting was also attended by Commissioner of Police Mohamed Hameed and senior police officials.