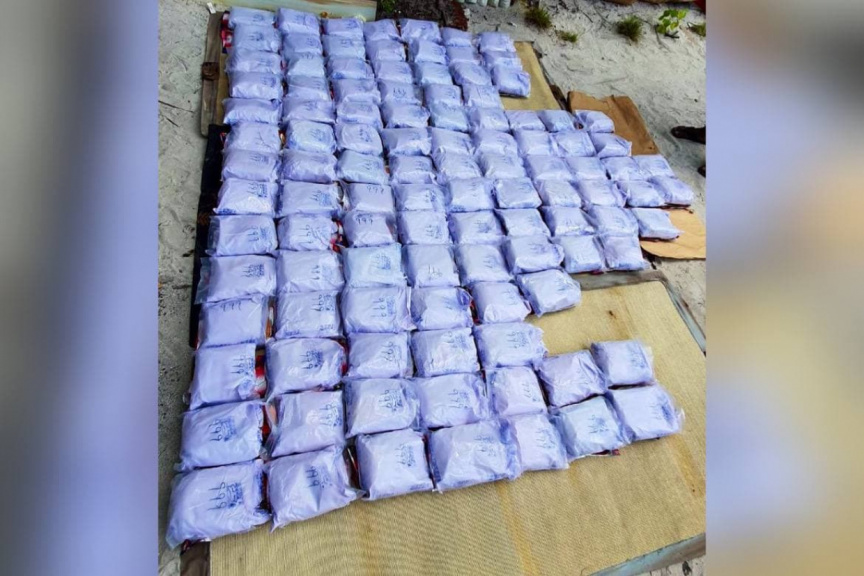 Over 100 kilograms of heroin seized by police in a joint counter-narcotics trafficking operation on October 13, 2021. (Photo/Mohamed Hameed, Commissioner of Police)

Prosecutor General’s Office has decided against appealing the release of two of 10 suspects arrested by police in a counter-narcotics operation last week which saw the seizure of over 100 kilograms of heroin with the High Court.

The 10 suspects were arrested on October 13, after a 24-hour counter-drug trafficking operation conducted by the Drug Enforcement Department (DED), Drug Intelligence, Marine Police, and Forensics Department.

The Criminal Court extended the remand of eight of the suspects, but released two – who the police believe to be ringleaders of the drug trafficking operation.

Prosecutor General’s Office spokesperson, Public Prosecutor Ahmed Shafeeu said on Tuesday that they have decided against appealing the decision with the High Court.

Shafeeu said the Prosecutor General’s Office made the decision as they don’t have the opportunity to submit new evidence in the appeal process, and do not believe appealing the decision based the evidence submitted to the Criminal Court will produce a different outcome.

He said that the Prosecutor General’s Office will have the opportunity to requests the Criminal Court for a new arrest warrant against the suspects if new evidence is found.

The eight suspects in custody in connection to the case are:

Police searched multiple uninhabited islands, locations in Male’ City and Hulhumale’, and a liveaboard vessel and a speedboat in the operation. The drugs were found hidden in Bodukaashihura, an uninhabited island located in ADh. Atoll.