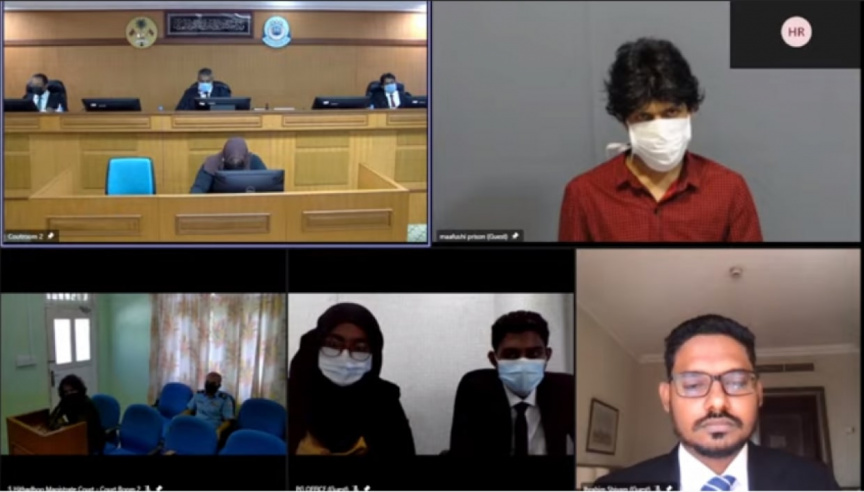 High Court holds sentencing hearing in the murder of Ahsan Basheer on October 12, 2021.

High Court has overturned the decision by the Criminal Court to acquit the suspects in the 2011 murder of Ahsan Basheer, sentencing Ibrahim Shahum Adam to death, and his accessory, Hassan Shimaz Mohamed Suvad to 15 years in prison.

Ahsan Basheer, Varudheege, S. Hithadhoo, died in a stabbing that took place at the Majeedhee Magu-Alikilegefaanu Magu junction at approximately 03:20 am on March 17, 2011.

Two men were charged in connection to the murder.

However, the Criminal Court acquitted them in 2014. Though Shimaz walked free with the ruling, Shahum – who had been convicted in 2013 of another murder – remained in prison.

The High Court overturned the seven-year-old ruling last week, finding the evidence sufficient to prove the charges against them.

However, the court postponed sentencing in order to consult Ahsan’s heirs on whether they wish to invoke Qisas.

The court ordered Shimaz to 10 days in jail until a decision could be made.

The sentencing hearing was held at the High Court on Tuesday afternoon.

The court found Shahum to be guilty of intentional murder beyond reasonable doubt under Islamic Sharia, and issued the death penalty.

All of Ahsan’s heirs had asked for the application of Qisas – to have his killer sentenced to death. Ahsan’s heirs are his parents and three sisters and four brothers. His father has passed away.

The court has ordered for Shahum to be imprisoned until the death penalty can be executed.

He was sentenced to 15 years in prison for the crime.

Shahum is already in prison, serving a life sentence for terrorism in connection to the murder of Mohamed Hussain, M. Beautyflower, Male’, in a gang-related attack at the Maziya football field in May, 2010.