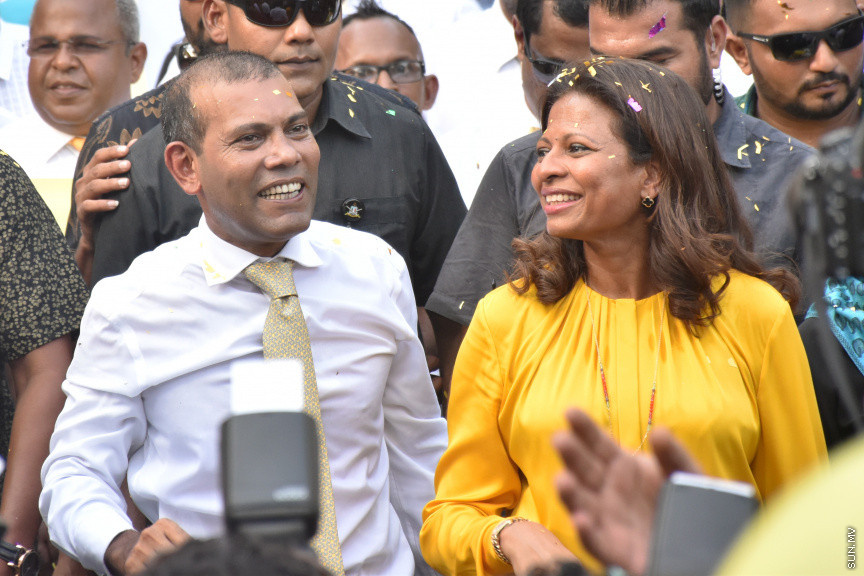 Parliament Speaker, former President Mohamed Nasheed, who was travelled overseas to treat injuries he sustained in an assassination attempt in May, is set to return to Maldives on Monday after months away.

The assassination attempt on Nasheed involved a homemade remote-controlled IED which was strapped to motorcycle parked nearby Nasheed’s residence in Male’ City, and was detonated at 08:27 pm on May 6, just as Nasheed, 54, exited his residence and went to get in his car. Nasheed was thrown to the ground and sustained multiple shrapnel wounds, while three members of his security detail and two bystanders sustained minor wounds.

He was airlifted to a military hospital in Germany on May 13, and travelled to the United Kingdom on July 21.

He is currently in United Arab Emirates to attend the Dubai Expo. Sun has been informed Nasheed is scheduled to arrive at the Velana International Airport in Male' on an Emirates flight at 02:30 pm.

A senior government official confirmed President Ibrahim Mohamed Solih will be at the airport to receive Nasheed.

MNDF's Special Protection Group (SPG) agents, accompanied by teams of other MNDF officers, are already at the airport to reinforce security.

Police have arrested 10 suspects in connection to the assassination attempt on Nasheed. Charges have been filed against 5 suspects.

One of the suspects – Adhuham Ahmed Rasheed, 26, - who the police believe to be the person who detonated the IED – pled guilty to terror charges under a plea deal with the prosecution in September.

Police said in a press conference in July that the suspects involved in the attack believe Nasheed to be an apostate who openly mocks the religion of Islam and Prophet Mohamed, and that killing him to be justified.

Police said that while they found evidence suggesting the suspects to be ISIS sympathizers, but found no evidence directly linking them with the international terror organization.

Nasheed had requested the Parliament for an extension to his leave in August, stating he was hesitant to return to Maldives unit the people who conspired to assassinate him were arrested and brought to justice. He has yet to make an official commented on what made him change his mind and return to Maldives.

Nasheed hints at a constitutional referendum before '23

'Majority believes courts are being reformed'