Counting votes: How US media figure out who won 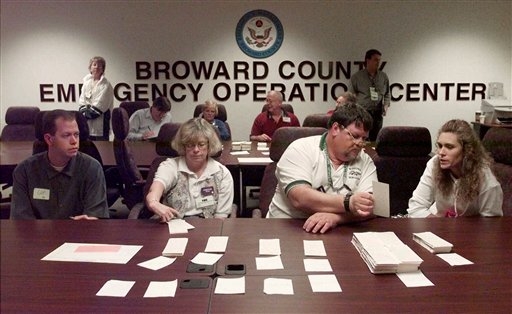 WASHINGTON (AP) — In the United States, most states don't announce official election results until weeks after Election Day. But most Americans are fairly certain they know who won from an unofficial source: the news media.

The media play a large role in not only reporting election results but figuring out who won — usually long before the last votes are counted and certified.

The United States decides who wins the White House with a state-by-state race for electors, which are awarded proportionally, based on the population in each state. In almost all states, electors are won on a winner-take all basis, and the winner needs to gain a majority of the Electoral College, or 270 electors.

The system is further decentralized below the states when it comes to counting votes. No single government authority oversees the process. Instead, officials in more than 4,000 counties, townships and parishes across the U.S. tally votes for president, Congress, governor, state legislature and a host of state and local offices.

The Associated Press will deploy more than 5,000 workers on Nov. 6 to collect vote results from government agencies and report them to news organizations — and the public — around the world. In all, the AP will report results for nearly 7,000 races.

Government officials get the final say on who wins elections — Congress verifies the Electoral College votes for president and vice president, while state and county officials certify election results in their jurisdictions. But the media get the first word on election night, an important role in the democratic process of a nation that demands fast and accurate information.

Analysts at the AP and other news organizations will use several tools to determine election winners, sometimes with very few votes actually counted. In elections for Congress and local offices, analysts will rely mainly on the AP vote count to determine the winners.

In statewide races for president, Senate and governor, analysts also will use exit polls, which are interviews with voters as they leave the polls on Election Day, and in some states, vote tallies from a randomly selected sample of precincts.

About 35 percent of the electorate is expected to vote before Election Day, either by mail or in person. To gauge how those people voted, analysts will use telephone polls of absentee voters in states where large numbers of people vote early.

For landslide elections, exit polls sometimes provide enough data to determine the winners before any votes are counted. Workers stand outside polling places throughout the day, asking voters to fill out confidential questionnaires about how they voted.

The AP and other news organizations have agreed to wait until poll closing time in any race before projecting a winner. Once the polls close, news organizations can declare winners in some landslide elections immediately, or shortly thereafter.

It won't take many — if any — votes to determine which presidential candidate wins in states that are solidly in one camp or another. Obama is not contesting Utah, where Republicans have won every presidential election since 1964, and Romney is making little effort in Rhode Island, traditionally a Democratic stronghold.

For races that are more competitive, analysts may use vote tallies from the randomly selected voting precincts to supplement data from the exit polls. The voting precincts are chosen at random, based on the same statistical models that pollsters use when they randomly choose people to answer surveys.

Workers report these vote totals soon after the polls close, giving analysts a relatively quick look at how the election is shaping up in that state.

For races that are even more competitive, news organizations rely on the AP vote count, the only national source of election results in all U.S counties and other vote-reporting jurisdictions.

As votes are tallied, analysts use statistical models to help project the winners. The models compare current votes in a race with results from previous elections.

Is Obama doing as well in central Ohio as he did on 2008? Is Romney doing better than John McCain did in the Cleveland area?

The closest races will come down to a county-by-county analysis of the remaining votes. If Romney is ahead in Ohio, are there enough votes left to be counted in Democratic-leaning counties for Obama to catch him? And what about the votes that don't get counted until after Election Day?

In 2008, nearly 12 percent of the votes in Ohio were counted after Election Day. Among them were 207,000 provisional ballots cast by people who weren't allowed to cast regular ballots because their names didn't show up on voter rolls or they had moved without updating their voter registrations. Ultimately, 81 percent of the provisional ballots in Ohio were counted in 2008.

Ohio's provisional ballots didn't affect the outcome of the presidential election in 2008 because Obama beat McCain by a relatively comfortable margin. But what if this year's presidential election comes down to Ohio — again — and there are fewer than 200,000 votes separating Obama and Romney?

It might take a few weeks to figure out who won the White House, after all.