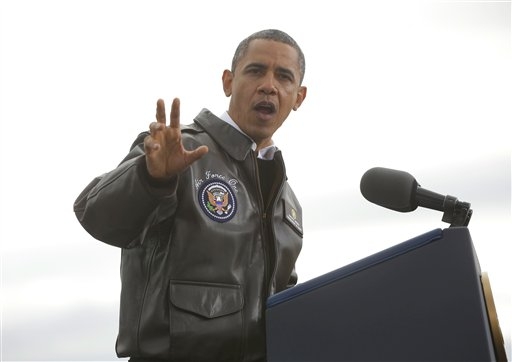 WASHINGTON (AP) — Barack Obama scored the endorsement of New York City's popular mayor, as the president and Republican challenger Mitt Romney opened a final campaign blitz in the last days of their incredibly close race for the White House.

Election day is Tuesday, and Obama and Romney were streaking between campaign stops in the all-important swing states after a three-day hiatus for Obama to manage the crisis surrounding Superstorm Sandy. Romney muted criticism of the White House incumbent during those days for fear of appearing to seek political advantage while Americans were battered by the historic natural disaster.

Thursday's endorsement of Obama by New York City's Michael Bloomberg, the popular and politically independent third-term mayor of America's largest city, was a major boost for Obama, who is spending the campaign's final days trying to win over independent voters who will be critical in determining who wins the Nov. 6 vote.

Both candidates had eagerly sought the backing of Bloomberg, who didn't endorse a presidential candidate in 2008.

Bloomberg, whose city was hard hit by the monster storm, said Sandy had made the stakes of the election even clearer. The billionaire businessman and former Republican said the climate is changing and that Obama has taken major steps in the right direction.

Of the two White House rivals, Bloomberg wrote in his endorsement that was posted on the Internet: "One sees climate change as an urgent problem that threatens our planet; one does not. I want our president to place scientific evidence and risk management above electoral politics."

In another possible boost for Obama, government and private sources were reporting a series of encouraging numbers about the economy, the consistently dominant issue in the race. Reports on home prices, worker productivity, auto sales, construction spending, manufacturing and retail sales suggested the recovery was picking up pace, and a measurement of consumer confidence rose to its highest level since February of 2008, nearly five years ago.

Still, none of the day's measurements packed the political significance of the campaign's final report on unemployment, due out Friday. Joblessness was measured at 7.8 percent in September, falling below 8 percent for the first time since Obama took office.

Both Obama and Romney were pressing intense closing arguments in their astonishingly close race as officials across the country reported that more than 20 million Americans had already cast ballots in early voting states.

The president moved quickly across three battleground states once he returned to campaigning Thursday, while Romney made three stops in critical Virginia and his campaign launched a tough Spanish-language television ad in Hispanic-heavy Florida showing Venezuela's leftist leader, Hugo Chavez, and Raul Castro's daughter, Mariela, saying they would vote for Obama.

Both candidates were battling for support from the thin slice of undecided voters in nine so-called swing states — Florida, Virginia, North Carolina, New Hampshire, Ohio, Wisconsin, Iowa, Colorado and Nevada — where voters cannot be predicted to reliably vote for the presidential standard-bearer of either the Democrats or Republicans.

Polls show Obama holds a slight lead in a majority of the battleground contests where the outcome of the vote is likely to be determined. Under the U.S. system, the nationwide popular vote does not determine the winner. Romney and Obama are actually vying to win at least 270 electoral votes in state-by-state contests. Each state has one elector for each member of the House of Representatives, seats apportioned according to population, and two for each state's two seats in the Senate. Even the smallest population state, therefore, is guaranteed three electoral votes.

Swing-state Ohio has seen and will receive massive attention from both Obama and Romney. Polls show Obama with a slight lead in the state. No Republican candidate for the White House has ever won the election without capturing Ohio.

At his first appearance of the day in Roanoke, Virginia, Romney pressed his message that he is the real candidate of change, the slogan Obama memorably made his own in 2008 and struggles to hold now.

"Real Change On Day One," read a huge banner in Roanoke, and the same on a sign on the podium where he spoke in Doswell, Virginia.

Obama seemed intent on making up for lost campaign time after a three-day turn as hands-on commander of the federal response to Sandy, although aides stressed he remained in touch with local officials and federal officials handling the storm.

In the campaign's final weeks, his rival "has been using all his talents as a salesman to dress up" policies that led to the nation's economic woes. "And he is offering them up as change," Obama said.