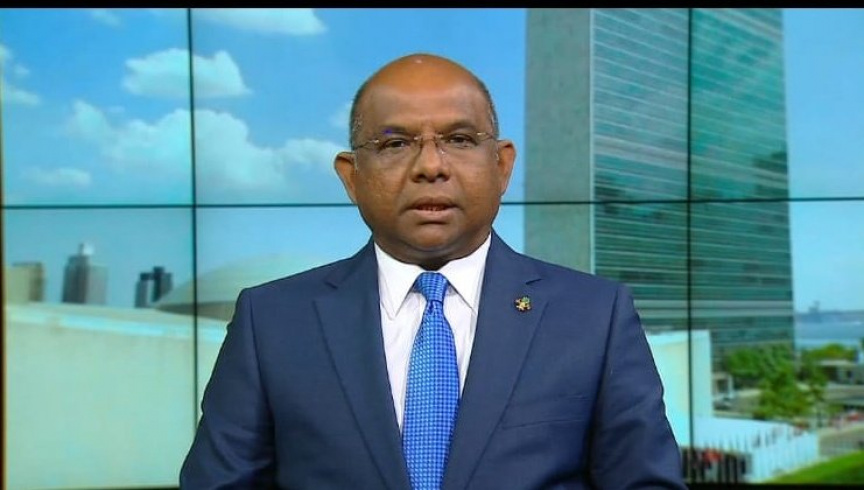 Maldivian Foreign Minister Abdulla Shahid delivers a video message during a virtual reception hosted by the Chinese Embassy in Male’ to mark the 72nd anniversary of the founding of China on September 26, 2021. (Photo/Foreign Ministry)

He made the statement in a video message at a virtual reception hosted by the Chinese Embassy in Male’ on Sunday to mark the 72nd anniversary of the founding of China and the assumption of office of new Chinese Ambassador Wang Lixin.

Shahid began his video message by extending greetings and good wishes to Chinese President Xi Jinping, and the government and people of China on behalf of Maldivian President Ibrahim Mohamed Solih and the people of Maldives.

He also congratulated Wang on assuming her post as the new Chinese Ambassador to Maldives.

Shahid that the bilateral relationship between Maldives and China were founded on Maldives’ commitment to the One China Policy, and shared values, principles of equality and mutual respect.

“Maldives will continue to work with China in the international arena on issues of mutual interest and looks forward to further strengthening the bilateral relationship that exist between the two countries,” he said.

Shahid also thanked the Chinese government for the support it extended to Maldives during the most challenging times of COVID-19 pandemic, by donating vaccines and other medical equipment.

He said that he looks forward to working closely with Wang, who assumed office on September 6.

"I am confident both countries can reach new heights in the China-Maldives bilateral relationship,” he said.