Russian Ambassador: Current status of Russia-Maldives relations is an indicator that it will continue to flourish 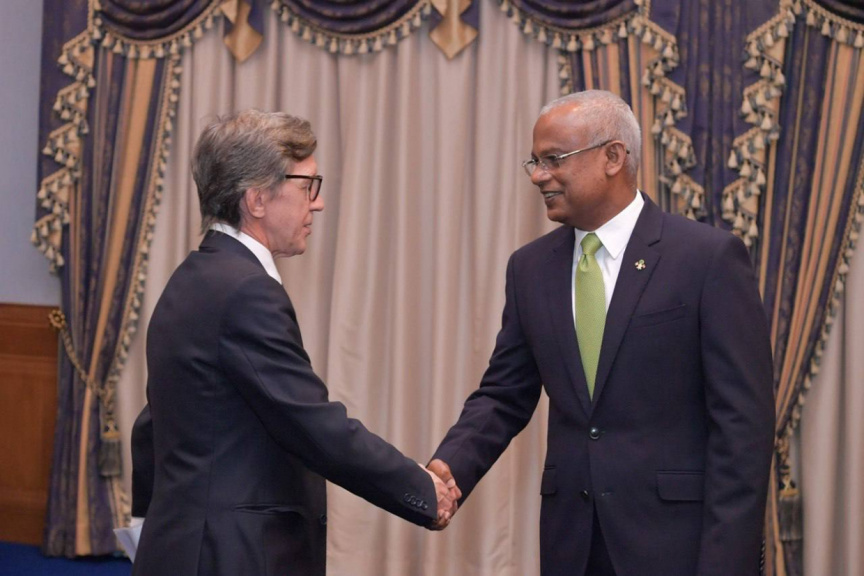 Ambassador of Russia to the Maldives Yury Materiy has stated that the current status of the close bilateral ties maintained between Russia and the Maldives serves as an indicator that it would continue to flourish.

Ambassador Materiy said this in a statement made on the occasion of the 55th anniversary of the establishment of diplomatic ties between Russia and the Maldives.

“The time-tested nature of the close Russian–Maldivian relations and their current status serves as an indicator that the bilateral political ties, the mutually beneficial cooperation in the trade, economic, educational and tourist spheres, as well as people-to-people contacts will continue expanding and developing,” he had said.

In Ambassador Materiy’s statement, he noted that the 55th anniversary of the establishment of diplomatic ties are being celebrated today – as relations continue further solidify through fruitful and extensive exchanges in different spheres.

Noting that the foreign ministries of both countries maintain regular contact – he noted that the official visit by Maldivian Foreign Minister Abdulla Shahid to Moscow, in 2019, was a milestone event in the diplomatic ties between Russia and the Maldives. During this visit, Minister Shahid met with Russian Foreign Minister Sergey Lavrov – where they had both discussed the status of and prospects for bilateral economic collaboration, noted the positive dynamics of trade, touched on the development of tourism, signed an agreement was signed between the two to allow visa-free travel between the countries for Russian and Maldivian citizens, agreed to expedite the coordination of a number of projects the countries were mutually working on and spoke about the avenues to strengthen coordination in the United Nations – and its bodies.

In January 2020, the foreign ministers had met once again on the sidelines of ‘The Raisina Dialogue’ conference held in New Delhi. In April, they spoke over a telephone call.

It was also highlighted in the Ambassador’s statement that the Maldivian Defense Minister Mariya Ahmed Didi had met Secretary of the Security Council of the Russian Federation Nikolai Patrushev on the sidelines of the X International Meeting of High Level Officials Responsible for Security Matters – that was held in Ufa, Russia on June 2019. During this trip, Minster Mariya also met with her Russian counterpart, Defense Minister Sergey Shoigu, for negotiations.

Ambassador Materiy also noted that both countries were developing inter-parliamentary contacts. In this regard, he noted that the Speaker of Parliament Abdulla Maseeh Mohamed had visited Russia in October 2017, to take part in the 137th Inter-Parliamentary Union Assembly. In July 2019, Addu Meedho MP Rozaina Adam participated in the second international forum on the Development of Parliamenteriasm – held in Moscow.

The Ambassador also noted that Russia has been providing education for Maldivian students since the 1970s – contributed to the development of bilateral ties between two countries as well as the development of professional human resources in the Maldives. Russia facilitates education opportunities at Russian universities for Maldivian students. Over 50 students are set to commence their studies in Russia this year alone.

Another pivotal milestone noted by Ambassador Materiy in his statement is the Maldivian government’s decision to establish an embassy in Moscow in 2019, along with the conclusion of an agreement between the governments of Russia and the Maldives to establish a Consulate-General of the Russian Federation in Male’ City in July 2021.

On the occasion of 55th anniversary of the establishment of diplomatic ties between Russia and the Maldives, Embassy of Russia in Sri Lanka and to the Maldives is showcasing related documents and photos through an online exhibition – which can be viewed here.