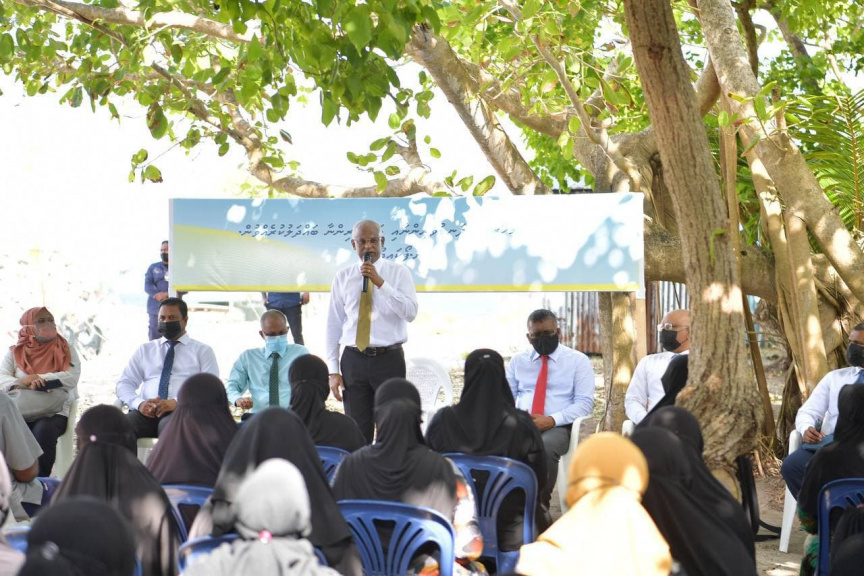 President Ibrahim Mohamed Solih has stated that his administration’s strategies to reshape the fisheries and the agriculture sectors would reinvigorate both sectors.

President Solih had made this statement whilst speaking at a meeting held with the fishing and the farming community at Sh. Foakaidhoo – as part of the President and the First Lady’s ongoing tour of Shaviyani and Raa Atoll.

During the meeting – President Solih listened to the concerns shared by the fishing and the farming community. He also assured that the administration will work on addressing the issues highlighted – noting that the government was already working on reforming Maldives Industrial Fisheries Company (MIFCO) operations and agriculture sector developments.

One of the main concerns raised by the farmers during the meeting was pertaining to supply-chain management. President Solih noted that the Agro National Corporation (AgroNAT) was formed by the government last year in order to remedy this – as well as to expedite an efficient supply chain, and ensure fair prices for farmers.

Concerns raised by fishermen were regarding the difficulties faces in acquiring ice – essential to ensure freshness of the catch – and about not receiving a fair market price for the catch. Following this, President Solih briefed the fishermen on the government’s strategies to reshape the industry which include boosting MIFCO’s capacity, add value to exports, utilizing its vessels for exports, in addition to cost-cutting measures. He also added that the government will hold discussions with private parties to ensure fair prices for fish.

The fishermen also requested that an ice plant be established on the island.

Foakaidhoo is the third destination in the President and the First Lady’s ongoing trip to eight islands in Shaviyani and Raa Atoll. Their first stop was at Sh. Funadhoo.

Man dies after being speared by a marlin