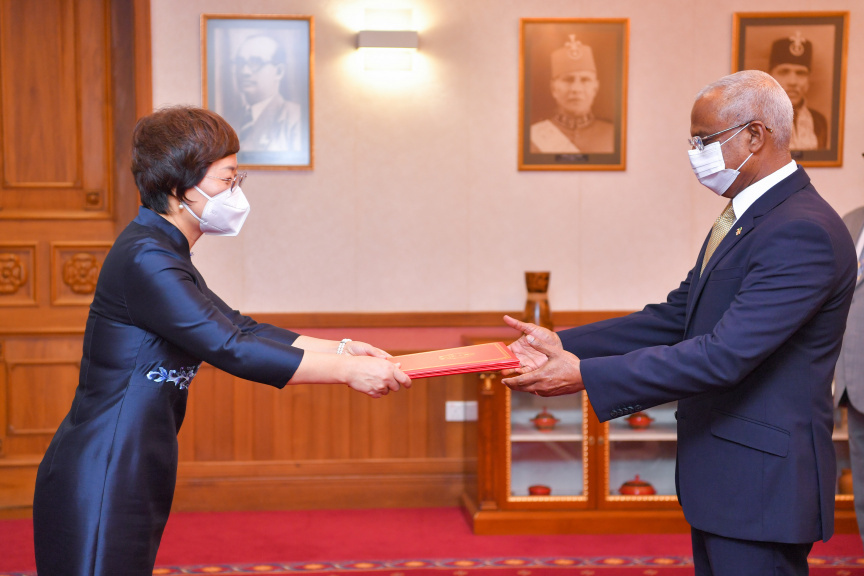 The newly appointed Chinese Ambassador to the Maldives has presented her Letter of Credence to President Ibrahim Mohamed Solih today.

Wang Lixin, the newly appointed Ambassador of China to the Maldives, presented her credentials to President Ibrahim Mohamed Solih during a special ceremony held at the President’s Office this morning.

A meeting between the two was held following the credentials ceremony at which President Solih congratulated Wang on her appointment and the commencement of her tenure. He also expressed his confidence that Wang would continue to further solidify the existing bilateral ties between China and the Maldives during her tenure.

Taking note that the next year marks the 50th anniversary of the establishment of bilateral ties between Maldives and China – President Solih pointed to the excellent relations between both countries. He also recalled a telephone conversation he held with the Chinese President Xi Jinping back in July, where they reaffirmed their commitment to solidify the existing bilateral relations in areas of mutual interest.

President Solih also highlighted the integral role played by the Chinese government in the socio-economic development of the Maldives. He also thanked the Chinese government for the generous donation of the Sinopharm vaccine – on two separate occasions – which boosted the country’s vaccination drive aimed at inoculating its entire population.

During the meeting, Wang extended well wishes from the Chinese government to President Solih and the people of Maldives. She also said that it is an honor as the Chinese Ambassador to the Maldives and assured that they would to her best capacity – carry the existing bilateral relations to new heights. Wang also commended the measures taken by the Maldivian government to curb the spread of COVID-19 in the country.

Concluding the call, the President and the Ambassador wished each other well - and reiterated their commitment to continue the bilateral relationship on a positive trajectory.

China to provide MVR 968.2M in grant aid to Maldives