President: Economy maintained at the level it was during pandemic by the efforts of fishermen 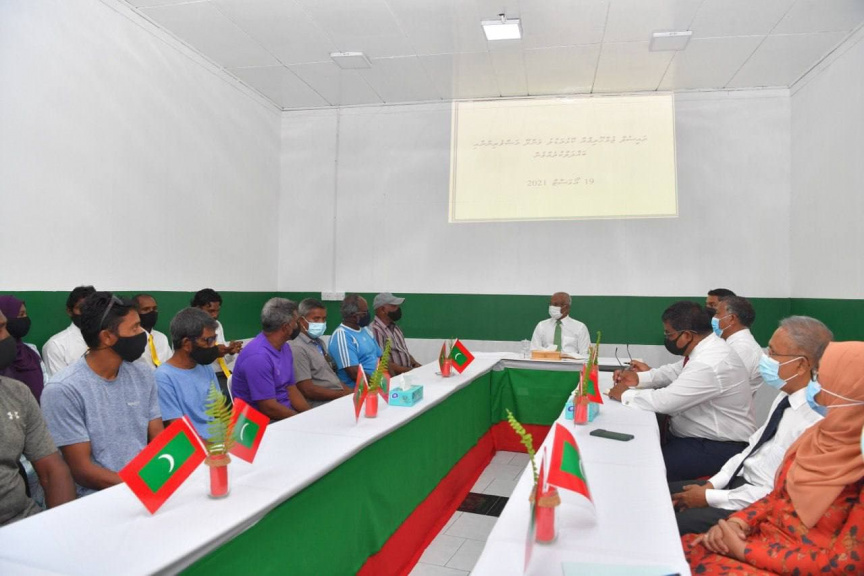 President Ibrahim Mohamed Solih has stated that the blow sustained by the Maldivian economy subsequent to the COVID-19 pandemic was refrained from getting any more serious through the efforts of local fishermen.

President Solih had made the statement during a meeting held with the fisher community of Th. Vandhoo as part of the agenda on his ongoing tour of Thaa Atoll.

Speaking in this meeting, President Solih stressed the importance which the government places in the development of the fishing industry – and also promised that the government will attend to all concerns they have regarding their livelihood.

President Solih and the fisher community also discussed the difficulties faced by the fishermen as well as heard possible solutions to their problems. One of the main concerns highlighted in this regard by the fisher community is regarding not receiving higher rates for local fish products in the international market and difficulties faced in weighing their catches due to the lack of facilities.

Responding to their concerns, President Solih reiterated the government’s commitment to ensuring fair and equitable rates for fisheries products. He also shared the detailed plans to increase the number of Fish Aggregating Devices and the expansion of MIFCO facilities to enhance fish handling capacity, including the plan to re-operationalize Funaddoo Island of Thaa Atoll to accommodate the needs of the community.

In addition to this, he also disclosed the details of his administration’s plans to expand the fishing industry and highlighted the efforts made to ensure local fish products get premium rates in the international market.

President Solih is accompanied on the tour by cabinet ministers, senior officials from the President’s Office, and a delegation of high-level government officials.