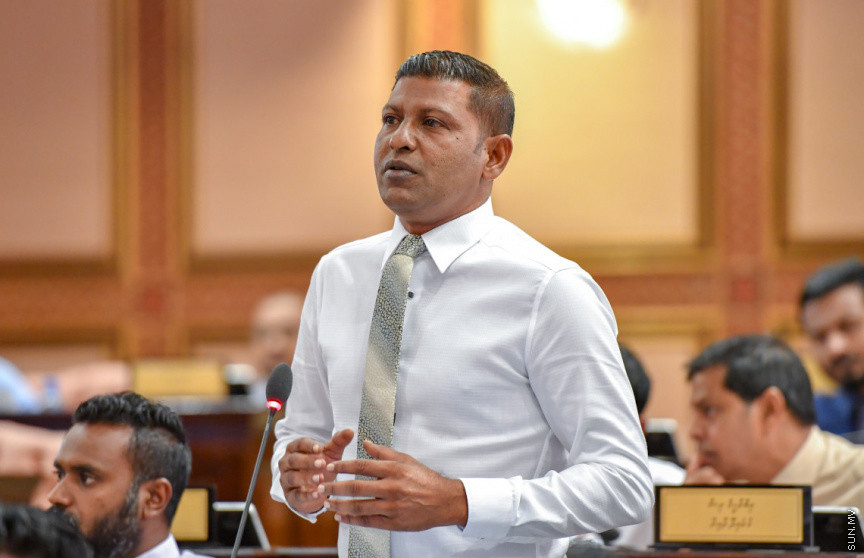 Prosecutor General’s Office (PGO) has filed two charges against Milandhoo MP Ali Riza in connection to the case of human trafficked migrant workers recruited to work at B. Bodufinolhu.

As per PGO, MP Riza is being charged with the offense of human trafficking under the Prevention of Human Trafficking Act, and obstruction of justice under the Penal Code.

If the charge of human trafficking is proven at court – MP Riza faces a 10-year jail sentence.

The case was filed at the Criminal Court last Wednesday.

According to PGO, MP Riza’s company – RIX Pvt. Ltd. – is suspected of using fraud to recruit a large number of migrant workers from overseas which suggests human trafficking. RIX was contracted to develop Bodufinolhu as a resort.

The company is also accused of seeking migrant workers believed to be victims of human trafficking from Maldivian islands, taking them under the company’s employment, transporting them between islands, exploiting the vulnerability and dire constraints of migrant workers, and forcing them to labor and withholding their wages over a long period of time.

In addition to this, they are also suspected of coercing and intimidating the workers who ask for their wages, dismissing them, or forcing them to remain working at Bodufinolhu. Some were allegedly sent back to Male’ as well.

RIX has also failed to pay fees and payments entitled to the State on behalf of the migrant workers.

PGO highlights these as acts of exploitation against the migrant workers and infringement of their basic human rights.

MP Riza is being charged with obstruction of justice for interfering with the efforts by the Police to search RIX’s office under a court order.

Apart from MP Riza, two additional people are being charged in connection to the case as well. PGO confirmed their identities as Hassan Umar, Blaasamge, N. Maafaru, and Nasrulla Usman, Red Rose, Sh. Milandhoo. They are both being charged with the offense of aiding or abetting human trafficking which if proven at court carries a seven-year jail sentence.

RIX employed some 200 migrant workers in Bodufinolhu, some of whom staged a violent strike over months of unpaid wages in July 2020; in which property was damaged, local workers were held hostage and some police officers who went to intervene were injured. 19 workers were arrested in connection to the case. The suspects were later released into the custody of Maldives Immigration.

RIX's Managing Director and Milandhoo MP Riza had admitted that the workers were owed four months of wages which were delayed due to the pandemic. RIX Company later shifted the blame to the developers of the island Seal Maldives for failing to provide funds owed under the agreement for the project – a claim which Seal Maldives denies.