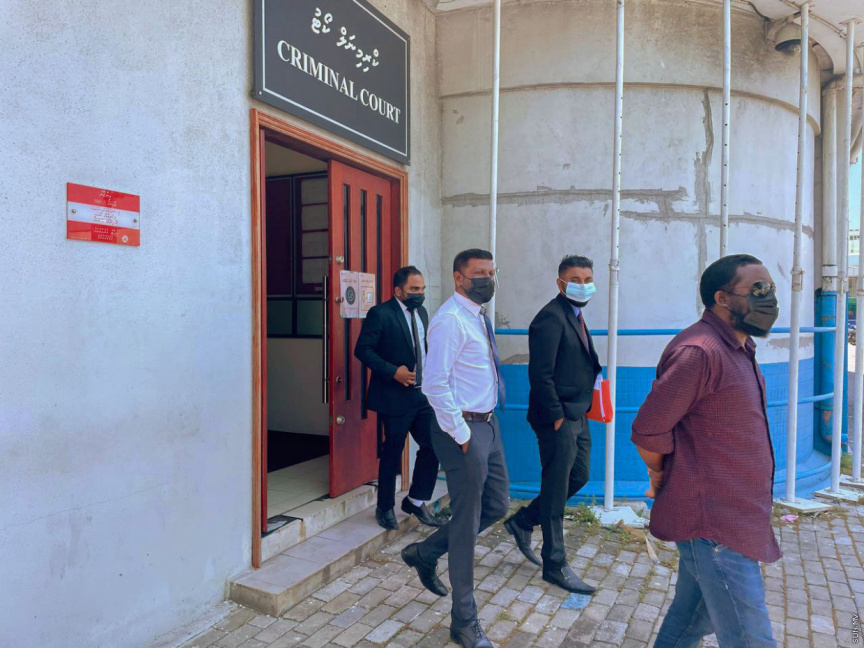 The pre-trial hearing in the human trafficking case against Milandhoo MP Ali Riza and other officials from RIX Pvt. Ltd. was cut short on Thursday, after the prosecution noticed a clerical error on the charge sheet.

The case stems from the treatment of migrant workers employed by RIX for its project in B. Bodufinolhu. RIX’s managing director Riza has been charged with human trafficking, while Hassan Umar, Blaasamge, N. Maafaru, and Nasrulla Usman, Red Rose, Sh. Milandhoo have been charged as accessories.

At the first pre-trial hearing in the case, all three defendants showed up to Criminal Court without a lawyer and were granted time to appoint lawyers.

The prosecution was scheduled to formally read the charges against the defendants at the hearing. However, as soon as the hearing began, the prosecutor asked the judge for permission to correct a clerical error on the charge sheet.

The defense did not object, but asked for two weeks to review the Article being revised.

The prosecutor did not object to allowing the defense time to review the Article, but said he does not believe it warrants additional time.

Concluding the hearing, Judge Dheebanaz Fahmy said she has decided to allow the prosecution to correct the error, and instructed for the revised charge sheet to be presented to court before Sunday.

The next hearing in the case is scheduled for October 26.

RIX employed some 200 migrant workers in Bodufinolhu, some of whom staged a violent strike over months of unpaid wages in July 2020; in which property was damaged, local workers were held hostage, and several police officers who went to intervene were injured. 19 workers were arrested in connection to the case. The suspects were later released into the custody of Maldives Immigration.

At the wake of the violence in Bodufinolhu, police launched an investigation into RIX on suspicion of “exploitation and forced labor of migrant workers, facilitating human trafficking, failure to pay fees and payments entitled to the State on behalf of the migrant workers and violation of the rights of migrant workers”.

The workers said they had not been paid their wages in months, and resorted to violence after they were threatened with deportation and injury in the hands of criminal gangs if they raised the issue of their unpaid wages.

MP Riza has admitted to failing to pay workers four months of wages, which he said was due to financial constraints due to the COVID-19 pandemic.

RIX, meanwhile, said the company was unable to pay the wages because it was owed payments by the resort’s developer Seal Maldives – a claim which Seal Maldives denies.

Seal Maldives’ legal representative, Advocacy Chambers said that it is the responsibility of the contractor to pay wages to its employees, and that while the contract between Seal Maldives and RIX Maldives stipulates paying the contractor at the rate of MVR 7,000, the company has paid well over MVR 21 million to RIX.

RIX is suspected of using fraud to recruit a large number of migrant workers from overseas which suggests human trafficking.

The company is suspected of seeking migrant workers believed to be victims of human trafficking from Maldivian islands, taking them under the company’s employment, transporting them between islands, exploiting the vulnerability and dire constraints of migrant workers, and forcing them to labor and withholding their wages over a long period of time.

The company is also suspected of coercing and intimidating the workers who ask for their wages, dismissing them, and sending them back to the greater Male’ region.