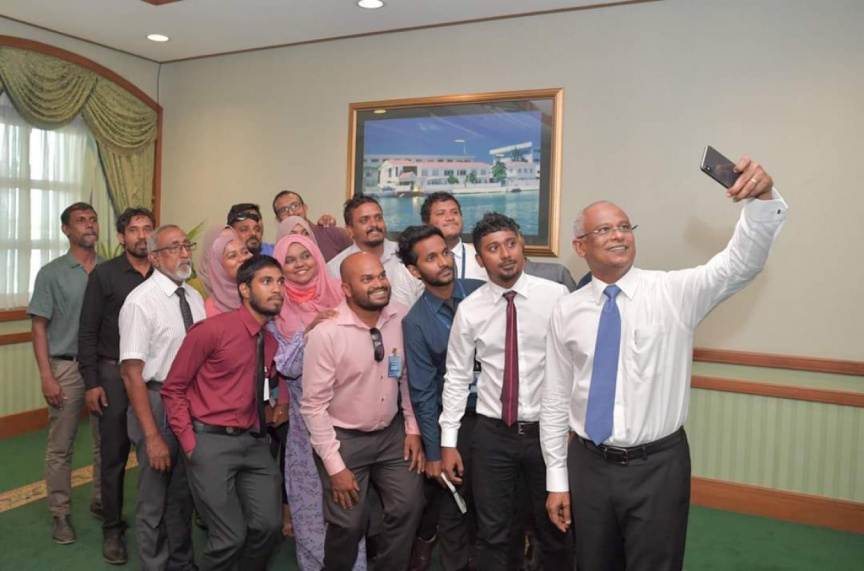 President Ibrahim Mohamed Solih takes a selfie with members of the press following a briefing at his office. (File Photo/President's Office)

Maldives Journalist Association (MJA) has called on the government to cease any and all efforts, whether direct or indirect, to influence the media regulatory processes established in law.

MJA made the appeal in response to the decision by Gender Ministry to fine one online media outlet, and reprimand three more for their coverage of the kidnapping and murder of a 13-year-old boy, whose body was found dumped in a suitcase in the Maldivian capital earlier this week.

Gender Ministry penalized the media outlets citing they released information which violate the dignity of the young boy, in their coverage of the case. Avas was fined MVR 2,000, while media outlets Adhadhu, One Online and Vaguthu were issued written reprimands.

In a statement on Thursday evening, MJA said that it strongly condemns the decision by a government ministry to use the Child Rights Protection Act to arbitrarily act as media regulator by regulating the content of media outlets and take punitive action against media outlets.

“Maldivian law clearly stipulates the mandate for media regulation and which institutions have the power to regulate the media. Despite these provisions enshrined in law, without any discussions with lawful regulatory bodies, the ministry unilaterally took action against media outlets,” said MJA in its statement.

MJA said it believes the decision will have an adverse impact on press freedom in Maldives.

MJA expressed concern that the Gender Ministry did not get in touch with any of the media outlets penalized prior to taking action against them, depriving them of any opportunity to respond to any alleged allegation before the government stepped in to take action.

“MJA deplores the government’s use of its powers to directly and unilaterally act as a media regulator, without following due process, including launching an investigation and offering media outlets the opportunity to respond to the complaints against them,” said MJA in its statement.

The association said that the decision is contrary to press freedom values, and is in clear violation of internationally established best practices relating to media regulation.

MJA said that it believes regulation of media outlets and the content of media outlets, especially in relation to media ethics, should be reserved for the bodies vested with the lawful mandate to regulate media outlets.

The association also said that Maldivian journalists have, overtime, experienced the bitter consequences when the government seeks to regulate the media, and that the adverse impact of such action on press freedom is clear.

“MJA takes this opportunity to call on the Maldives government to repeal the actions taken against the media outlets and to stop any and all efforts, whether direct or indirect, to influence the media regulatory processes established in law,” said MJA in its statement.