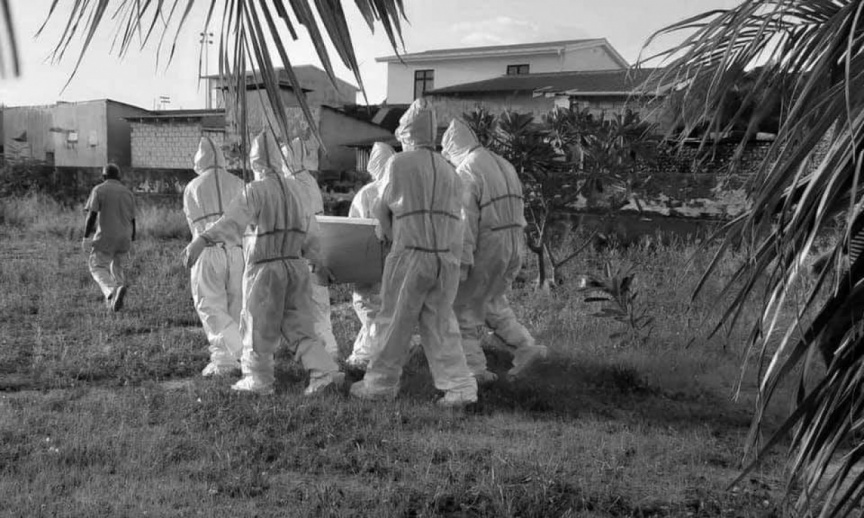 Funeral workers carry the coffin of a 63-year-old man from Lh. Hinnavaru who died from COVID-19 on March 29, 2021. (Photo/Lh. Atoll Hospital)

Health Protection Agency (HPA) has reported six COVID-19 fatalities in Maldives in early Wednesday; two in L. Atoll and one in the greater Male’ area.

The two fatalities in L. Atoll were patients admitted to the Laamu Covid Management Facility.

The first patient - identified as an 87-year-old Maldivian male - passed away at 01:54 am.

The second patient - identified as a 69-year-old Maldivian female – passed away less than approximately two hours later at 3:01 am.

The third fatality was a 73-year-old Maldivian male who was brought to the Emergency Room of Indhira Gandhi Memorial Hospital (IGMH) in Male’ City. He was declared dead at 07:25 am.

The first patient from Hulhumale’ Medical Facility – identified as a 63-year-old Maldivian female – passed away at 08:30 am.

With the six fatalities, which came within the span of mere hours, Maldives’ COVID-19 death toll has risen to 111.

Maldives has been experiencing a surge in both infection rate and fatalities in recent weeks.

This May has seen the highest number of COVID-19 fatalities in Maldives, with 34 deaths.

The country currently has 18,221 active cases. 268 of the patients are hospitalized.