MRM: No confidence motion against Zaha is a ploy against women empowerment 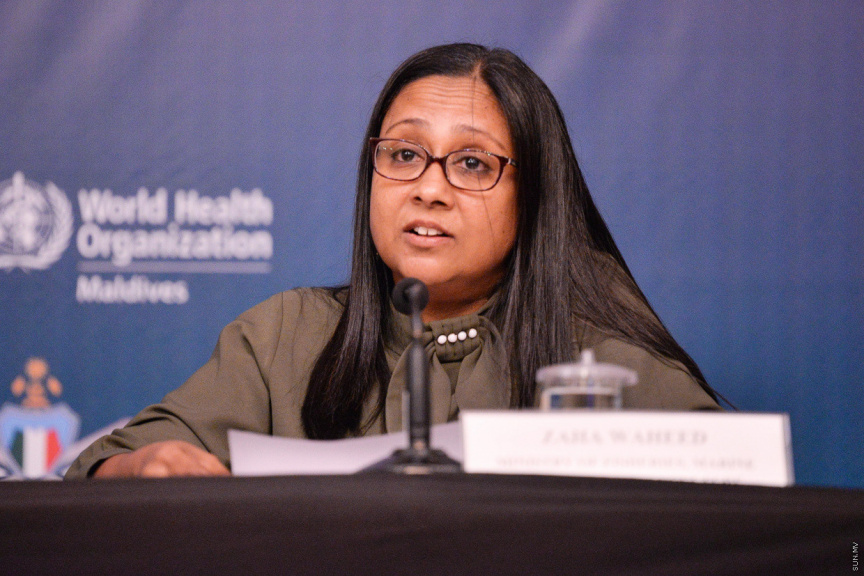 Maldives Reform Movement (MRM) has defended Fisheries Minister Zaha who is the subject of a motion of no confidence in the parliament by opposition parties.

A total of 11 opposition lawmakers signed the motion which was submitted to the parliament yesterday.

MRM, led by former President Maumoon Abdul Gayoom, said in a statement that the motion of no confidence was work against the empowerment of women in the Maldives.

The party expressed concern over the conduct of a few lawmakers to sideline women. MRM said that the current coalition administration had paved the way for women to reach top positions in the nation and that this was the reason for jealousy and discontent among these lawmakers.

MRM said that it recognized the importance of women in the development of the nation.

The motion of no confidence against Minister Zaha, however, is on the basis that she has failed to fulfill a number of pledges made by the government for fishermen in the Maldives. The opposition lawmakers noted pledges such as the provision of a steady supply of ice to fishermen, providing a fair price for their catch, and providing foreign currency to the fishermen.

MRM however, defended Minister Zaha by stating that the motion was a politically motivated ploy to create divisions among the coalition. MRM said that Minister Zaha had completed a joint honors degree in oceanography and marine biology and had a lot of experience in the fisheries industry.

MRM also noted that during her two-year tenure as Minister, Zaha had modernized 20-year old laws related to fishing, formulated management plans for fishing, and paved the way for fishermen to continue with their work despite the difficult period endured during COVID-19.

Minister Zaha is also working tirelessly to obtain fair prices for Maldivian catch in European markets, formulating a pesticide law for sustainable agriculture, and developing a mariculture industry in the Maldives, noted the MRM.

The party then went on to note the issues resolved in MIFCO by the Minister before describing her as a capable and active figure.

MRM ended the statement by saying that Minister Zaha was a notable figure in the administration of President Ibrahim Mohamed Solih, and dedicated in public service, before pledging to remain with the administration until the end of the term.