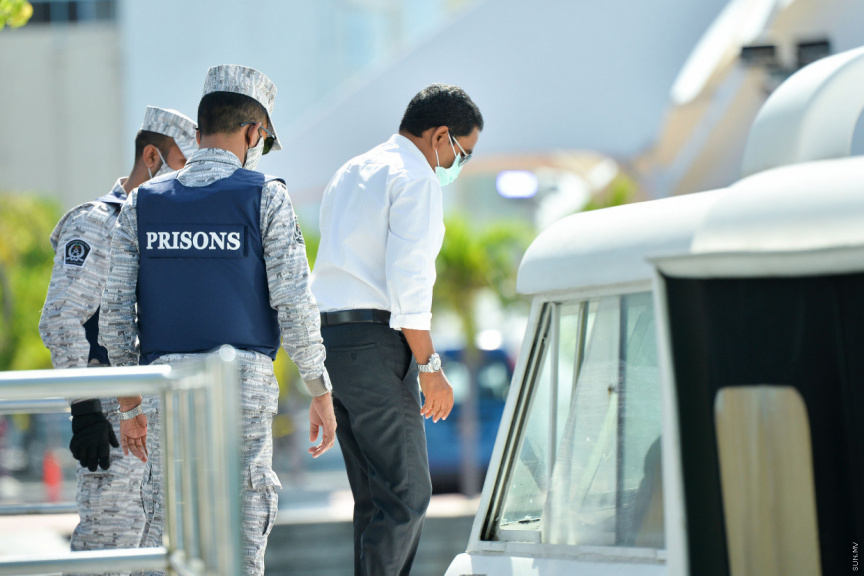 Jailed former Maldivian President Abdulla Yameen Abdul Gayoom, who previously told the High Court he received USD 5 million in political donations, refused to answer when asked to explain the source of the donations.

Yameen had made the statement during an appeal hearing at the High Court over his money laundering conviction in July. He said that he received USD 5 million in political donations, which were accepted on his behalf by former Vice President Ahmed Adeeb Abdul Gafoor and former Fisheries Minister Dr. Mohamed Shainee.

Judge Mohamed Niyaz referred to this statement at the appeal hearing this Tuesday, and asked Yameen to clarify the source or sources of the said political donations. Niyaz said he cannot take the statement into consideration unless the source of the donations becomes clear.

Yameen’s legal representative, Dr. Mohamed Jameel Ahmed did not provide a direct answer, but said that the use of money donated by benefactors is not against the law.

Meanwhile, Yameen said that Adeeb had handled all political donations he received, and that the USD 5 million he mentioned during the previous hearing was accepted on his behalf by Adeeb and Shainee.

He, too, did not provide a direct answer to the question.

Yameen was sentenced to five years in prison and fined USD 5 million (MVR 77 million) for money laundering in December 2019.

He was found guilty of laundering USD 1 million in misappropriated State funds - the acquisition cost for G. A. Vodamula which should have gone into Maldives Marketing and Public Relations Corporation (MMPRC).  The USD 1 million was transferred to his bank account in two transfers of USD 500,000 through SOF Private Limited.

Police search for 11 migrants who fled from facilities