Ameen: Health Ministry did not steal, acted in good faith 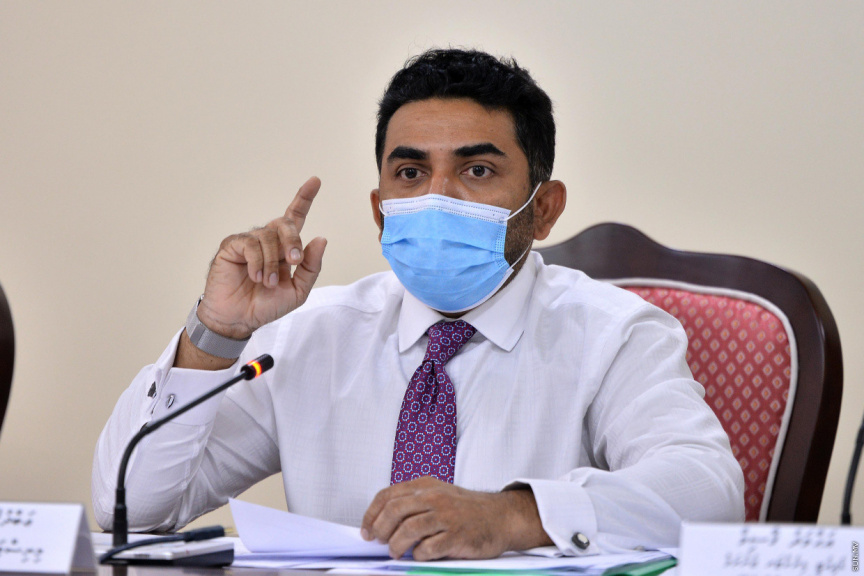 Health Minister Abdulla Ameen gestures as he speaks during a meeting with the Parliament's Public Accounts Committee on August 25, 2020. (Sun Photo/Fayaz Moosa)

Abdulla Ameen, who has voluntarily stepped aside from his duties as Health Minister, said on Tuesday that the spending by Health Ministry to protect from COVID-19 were not acts of theft, and that all officials had worked with sincerity.

Top officials from the Health Ministry were summoned for an inquiry initiated by the Parliament’s Public Accounts Committee on the findings of a compliance audit on the ministry’s COVID-19 related spending on Tuesday afternoon.

“From the information that I have available, I have been briefed that the ministry’s officials did not work with the intention of obtaining undue benefits, to facilitate corruption, or to steal. I therefore do not believe they worked to obtain an undue benefit, or any such intention,” he said.

Ameen said that while he did not believe the officials intended to engage in wrongdoing, he also couldn't say they had fully complied with certain procedures.

“I cannot say with certainty that there weren’t any administrative or procedural issues over the course of this work,” he said.

The biggest issues highlighted in the compliance audit report are linked with the contracts awarded to three private companies to procure ventilators needed to treat COVID-19 patients in critical condition, primarily the MVR 34.50 million contract to Dubai-based Executors General Trading to procure 75 ventilators.

Health Ministry had previously stated that the contract to Executors General Trading was awarded at the recommendation of World Health Organization (WHO) office in Male’. However, the audit report shows there is no evidence of official communications between WHO and Health Ministry regarding the procurement of ventilators.

Responding to this, Ameen said that though the procurement of ventilators had initially been contracted to two local-based companies, the companies had faced challenges in delivering the ventilators, and that the objective of the government therefore became to procure the much-needed ventilators as soon as possible.

He said that the Health Ministry had worked to procure the ventilators as soon as possible, under the threat of losing numerous lives.

“I spoke directly with a representative from the WHO’s country office in Maldives.  I said we were facing immense challenges in procuring ventilators. And asked that he share any information he may have which will aid in the effort,” he said.

Ameen said the representative got back to him with “a name and contact number” a few days later.

He said he does not believe the communication in question had been of a personal nature, but that it had been carried out under his official capacity as Health Minister.

“At this point, I passed on the information to the ministry’s financial executive and asked him to look into it. I continue to refuse to believe the communication between myself and the WHO representative were private, and I never will,” he said.

He said the Health Ministry had received approval from the Finance Ministry and the counsel of the Attorney General to award the contract under single-source procurement, to expedite the process.

The audit report shows the Health Ministry paid MVR 30.91 million, which made for 90 percent of the total payment, to Executors General Trading as an advance, without obtaining an advance guarantee.

Top officials from Health Ministry told the Public Accounts Committee on Tuesday that they do not believe the audit report to be fair, and that certain information had been omitted from the report.