Tanker off UAE sought by US over Iran sanctions ‘hijacked’ 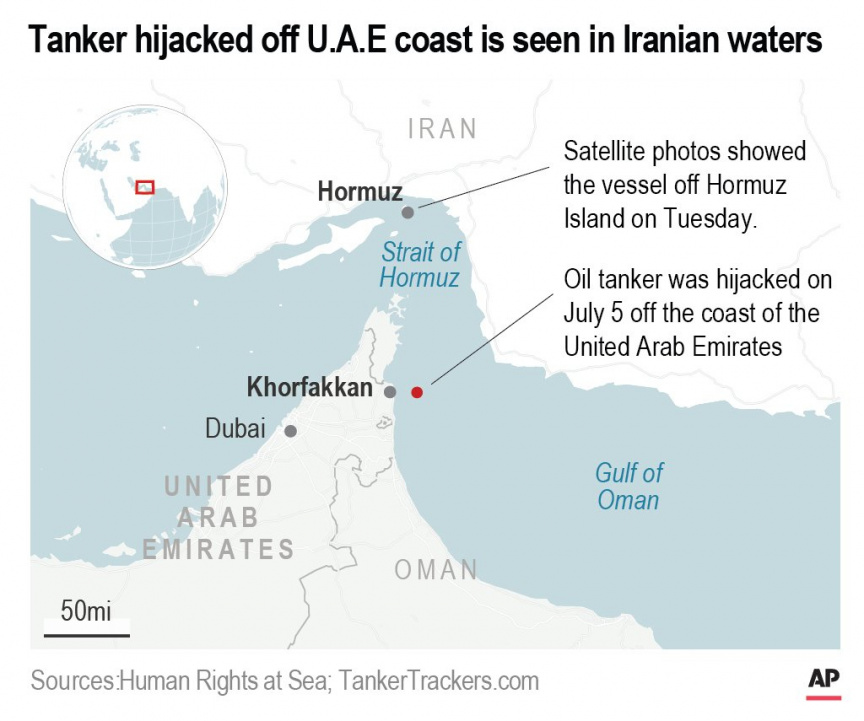 Oil tanker sought by the U.S. was hijacked july 5 off the U.A.E. coast.;

Satellite photos showed the vessel in Iranian waters on Tuesday and two of its sailors remained in the Iranian capital.

It wasn’t immediately clear what happened aboard the Dominica-flagged MT Gulf Sky, though its reported hijacking comes after months of tensions between Iran and the U.S.

David Hammond, the CEO of the United Kingdom-based group Human Rights at Sea, said he took a witness statement from the captain of the MT Gulf Sky, confirming the ship had been hijacked.

Hammond said that 26 of the Indian sailors on board had made it back to India, while two remained in Tehran, without elaborating.

“We are delighted to hear that the crew are safe and well, which has been our fundamental concern from the outset,” Hammond told The Associated Press.

Hammond said that he had no other details on the vessel.

TankerTrackers.com, a website tracking the oil trade at sea, said it saw the vessel in satellite photos on Tuesday in Iranian waters off Hormuz Island. Hormuz Island, near the port city of Bandar Abbas, is some 190 kilometers (120 miles) north of Khorfakkan, a city on the eastern coast of the United Arab Emirates where the vessel had been for months.

In May, the U.S. Justice Department filed criminal charges against two Iranians, accusing them of trying to launder some $12 million to purchase the tanker, then named the MT Nautica, through a series of front companies. The vessel then took on Iranian oil from Kharg Island to sell abroad, the U.S. government said.

Court documents allege the scheme involved the Quds Force of Iran’s paramilitary Revolutionary Guard, which is its elite expeditionary unit, as well as Iran’s national oil and tanker companies. The two men charged, one of whom also has an Iraqi passport, remain at large.

“Because a U.S. bank froze the funds related to the sale of the vessel, the seller never received payment,” the Justice Department said. “As a result, the seller instituted a civil action in the UAE to recover the vessel.”

That civil action was believed to still be pending, raising questions of how the tanker sailed away from the Emirates after being seized by authorities there.

Data from the MT Gulf Sky’s Automatic Identification System tracker shows it had been turned off on July 5, according to ship-tracking website MarineTraffic.com. Ships are supposed to keep their AIS trackers on, but Iranian vessels routinely turn theirs off to mask their movements.

Meanwhile, the 28 Indian sailors on board the vessel found themselves stuck on board without pay for months, according to the International Labor Organization. It filed a report saying the vessel and its sailors had been abandoned by its owners since March off Khorfakkan. The ILO did not respond to a request for comment.

As tensions between Iran and the U.S. heated up last year, tankers plying the waters of the Mideast became targets, particularly near the crucial Strait of Hormuz, the Persian Gulf’s narrow mouth through which 20% of all oil passes. Suspected limpet mine attacks the U.S. blamed on Iran targeted several tankers. Iran denied being involved, though it did seize several tankers.