Hisaan: The only option is to amend the Constitution 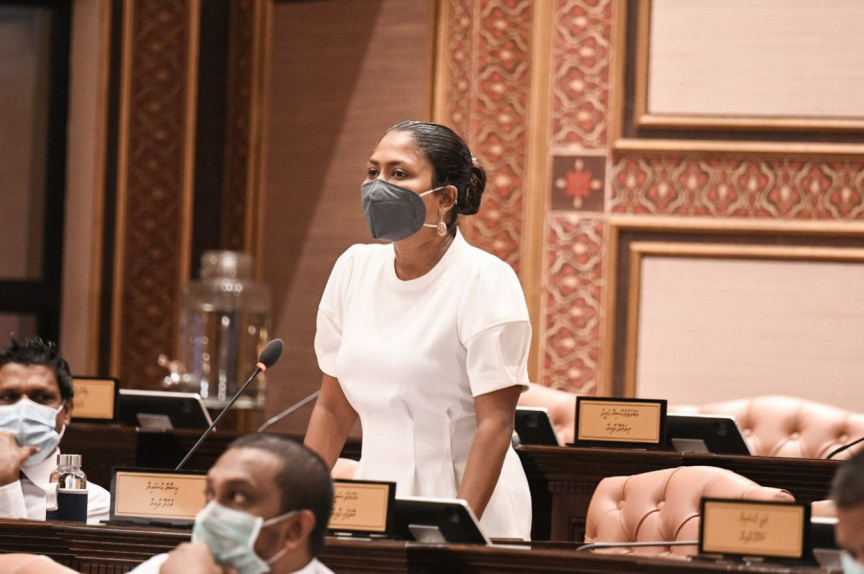 Thulhadhoo MP Hisaan Hussain wears a mask to protect from the spread of the new coronavirus as she attends a parliamentary sitting on May 26, 2020. (Photo/People's Majlis)

Thulhaadhoo MP Hisaan Hussain, on Tuesday, said the only solution to the legal vacuum with the forced postponement of the local council election is to amend the Constitution.

The postponement of the elections, while necessary to curb the spread of the virus, will create a legal vacuum, once the term of the current councilors expires on June 3.

The government had originally submitted two pieces of legislature to remedy the situation; sunset bill to postpone the election as late as January 6, 2021, and a constitutional amendment to extend the term of current councilors until such time as an election is held.

While the sunset bill was passed by the Parliament in late April, the constitutional amendment was tabled over a difference of opinion within the Parliament over the legality of a constitutional amendment at such a time. And even after both the Attorney General Ibrahim Riffath and Counsel General of Parliament Fathimath Filza provided assurance there was no legal obstacle to making the amendment, some parliamentarians continued to express reservations, arguing that it went against the spirit of the constitution.

With time running out, parliamentarians wore masks as they gathered for deliberations over the constitutional amendment – the first sitting to be held amid the coronavirus outbreak within the Maldivian capital.

Joining the debate, Hisaan said she does not believe a general law can be used to override a provision of the Constitution which declares a specific term.

She said that the only solution was to amend the Constitution.

“I am in favor of passing this amendment to the Constitution,” said Hisaan.

Hisaan noted that many parliamentarians had been concerned regarding the issues which may arise from incumbent councilors being granted an extension to their term. She said that the amendments by the Parliament’s Decentralization Committee following its review of the sunset bill submitted by West Henveyru MP Hassan Latheef provided solutions to some of the concerns.

Hassan Latheef’s bill, titled The Special Bill on Ensuring the Operation of Administrative Divisions of Maldives under Decentralization Policy 2020” underwent drastic amendments during the committee process. Some of the key amendments include establishing that after the term of incumbent councilors expires, councils will be overseen by “interim councilors” and significant rollbacks on their powers.

WHO pledges support to preparations to reopen schools