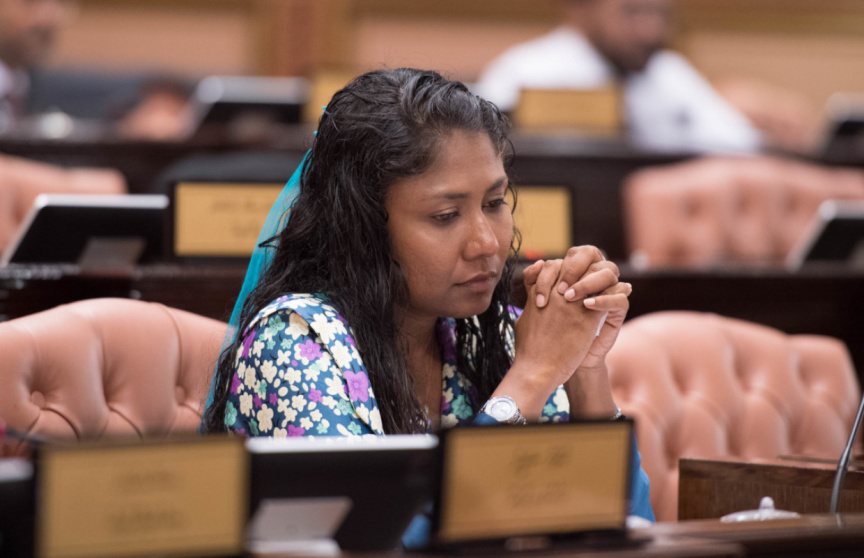 Thulhaadhoo MP Hisaan Hussain has presented three measures that will aid in stopping the dark acts by extremists being carried out in the Maldives.

Hisaan was speaking at the parliament regarding the murder of journalist Ahmed Rilwan. Commission on Murders and Enforced Disappearances revealed on Sunday that three witnesses have come forward to testify that Rilwan was abducted, forced into a car, put on board a dinghy boat, transferred to another vessel, and then murdered by decapitation in the early hours of August 8, 2014.

MP Hisaan stated that people should be speaking and sitting idly about the "Dark state, Deep state". She also stated that the parliament will start its work against these people and presented three measures to be taken against such people to the parliament.

Amending or changing the necessary laws involved such as the law regarding police, after a careful evaluation of the Commission on Murders and Enforced Disappearances report.

A special procedure to be introduced and implemented as the law for the issues noted in the Commission on Murders and Enforced Disappearances report.

A task force to be formed that includes members from all the relevant institutions to evaluate and oversee how the issues noted in the Commission on Murders and Enforced Disappearances report are being investigated and addressed.

MP Hisaan noted that the country needs to be proactive in this matter in order to stop this dark state. She noted how Ahmed Rilwan had tweeted about the matter in 2007 "They are here and they are a danger to this country, but what can we do?". She stated that what Rilwan had spoken about then has become well and officially documented and that there was no denying the existence of these people in the country.

She called for other MPs to support her measures

Hisaan: The only option is to amend the Constitution