Saving Fainu proves a blessing, amid the coronavirus pandemic 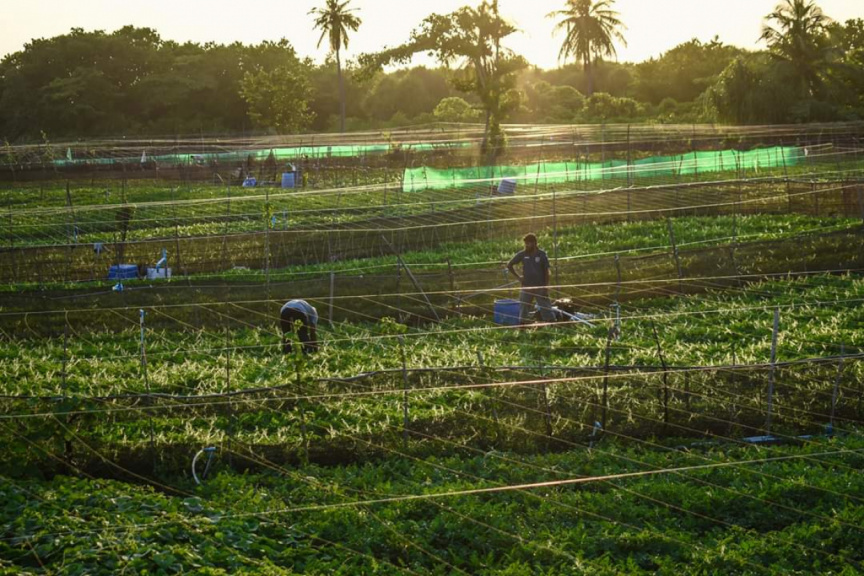 R. Fainu had always been an agricultural island. The island usually grows produce for the holy month of Ramadan – when food consumption in Maldives reaches its peak. The island grows watermelon, pumpkin, butternut and chili, and sells it in the open market – serving as a source of income for the residents of the island, and a source of food for them and others.

The decision, during the administration of President Abdulla Yameen Abdul Gayoom to build an airport and city hotel in Fainu had threatened the island’s farming business. It led to the launch of the Save Fainu campaign, and the Environmental Protection Agency (EPA) later intervened to deny permit for the airport development project on the island.

The current administration, which is dealing with an unprecedented economic upheaval in the wake of the COVID-19 pandemic, has announced a nationwide agricultural initiative to ascertain food security. The administration wants islands rich in land to issue farmland to residents, and to buy up all local produce through the AgriCenter which will be established in May, lessening Maldives’ reliance on imports.

The situation has drawn attention to islands rich in farmland such as Fainu, and the important role they play towards national food security. Many have pointed out that it is for situations such as this that they had advocated to save Fainu.

Farming on Fainu had previously been seasonal. Farmland was leased for six months at a time. But the island council is now reconsidering its previous system, to lease out farmland for greater periods.

A farmer from Fainu, Ahmed Waheed said he was considering expanding his business – an option which he would not have been able to consider if the airport project had gone ahead as planned.

Waheed said he had always found the island’s farmlands to be more important than an airport.

He is thankful Fainu hasn’t lost its farmlands – a sentiment echoed by other farmers on the island.

“I choose farmland, now and even then. The airport project was planned such that the island stood to permanently lose not just the farmlands, but a huge area of the island. We find our farmlands, and the surrounding beach of far greater importance,” said Waheed.

Ungoofaaru MP Mohamed Waheed (Wadde), who was born in Fainu and is now the parliamentary representative for both Fainu and Ungoofaaru, had been a key advocate to save the island.

Wadde told Sun he credited the dismantlement of the airport project to the Save Fainu movement.

They had said the airport and city hotel project threatened the island’s farmlands even then, he said.

Wadde said that because Fainu lacked a proper lagoon which could be reclaimed to build the airport and city hotel, the plan then had been to build the infrastructure on existing land.

It would have led to the loss of a large area of the island’s non-residential land, he said.

“The area where the airport was planned to be built is where laurelwood grow. The area is not leased for farming. Therefore, we would have still had plenty of land to lease to the current farming population. If the airport had been built, the people would have enjoyed more development, more prosperity, and more income,” said Naseer.

While the land in the eastern-end would have fallen within the boundaries of the airport, if it had been built. Some of the other projects linked with the airport had been planned for the farmland on the western end of the island.

The former administration hadn’t planned on building just an airport, but also a city hotel, an Island Aviation training center, and a cargo village. The city hotel had been planned to be built on Fainu’s western farmland. If the project had gone ahead as planned, Fainu would have lost those farmlands. The people of Fainu are thankful they remain in possession of their farmlands, today.

R. Fainu, a beautiful island under threat of erosion!