R. Fainu, a beautiful island under threat of erosion from every side! 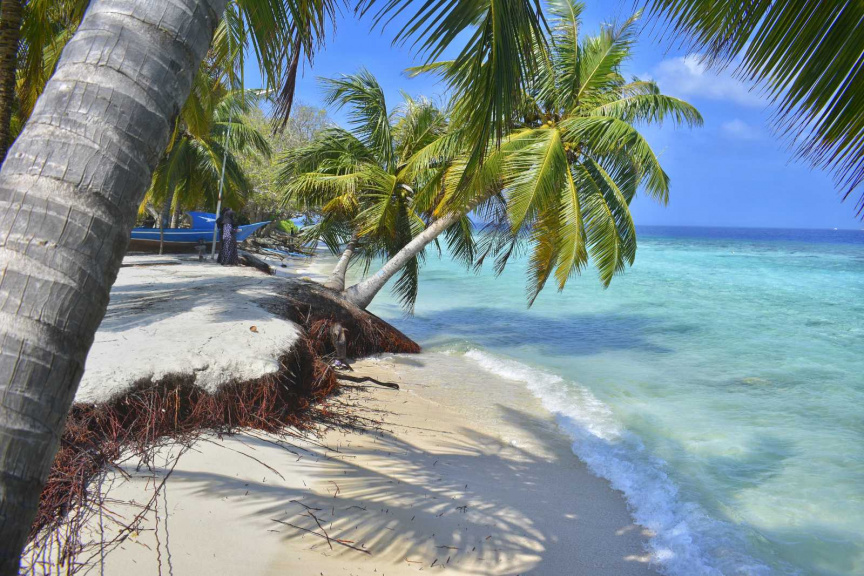 An island blessed with naturally beautiful beaches and coastlines, R. Fainu has trees that are almost 100-years old on its beaches.

Today, the island and its people are threatened with erosion that is threatening these trees and the island from every side.

Ibrahim Nasir, council president of R. Fainu stated to the “Sun” that coastal erosion the island was not a stranger to coastal erosion. After the areas under erosion were designated in 2016 as a protected area, the problem somewhat subsided.

“2017 and 2018 went well. Problems of erosion did not occur. However, the problem started to recur since mid-2019 and has now turned huge. Erosion has caused 200-year old trees to fall.” said Nasir.

The fallen trees that have provided shade for the islanders and visitors and the damaged environment will have a very adverse effect on the future generation, according to Nasir.

“The whole facade of the island is being lost, and it seems that this is caused because of climate change. Fainu is faced with erosion at a level previously unseen in recent history,” said Nasir.

The council is working hard to bring this issue to the attention of the authorities. Environment Ministry and Environment Protection Agency (EPA) were notified of the erosion problems as last year when the issue was first noticed. The council also sent a letter to the President’s Office requesting a solution for the frightening problem.

“We wrote to the EPA and the Environment Ministry for advice and assistance in protecting and resolving the matter along with the help of nearby resorts,"

"The answer to the letter was that the Ministry did not conduct work on placing deo bags and an Environment Impact Assessment (EIA) was necessary if deo bags were to be placed. That it cannot be done without an EIA.” said Nasir.

Nasir stated that efforts were being made to protect the area with the help of benefactors.

A large area of the beautiful island is already gone, according to Nasir. While the trees on the northern end of the island are falling, the displaced soil is being deposited to the sand spit on the western side of the island.