Dr. Latheef: Frightening prospect of virus evident from US, Italy 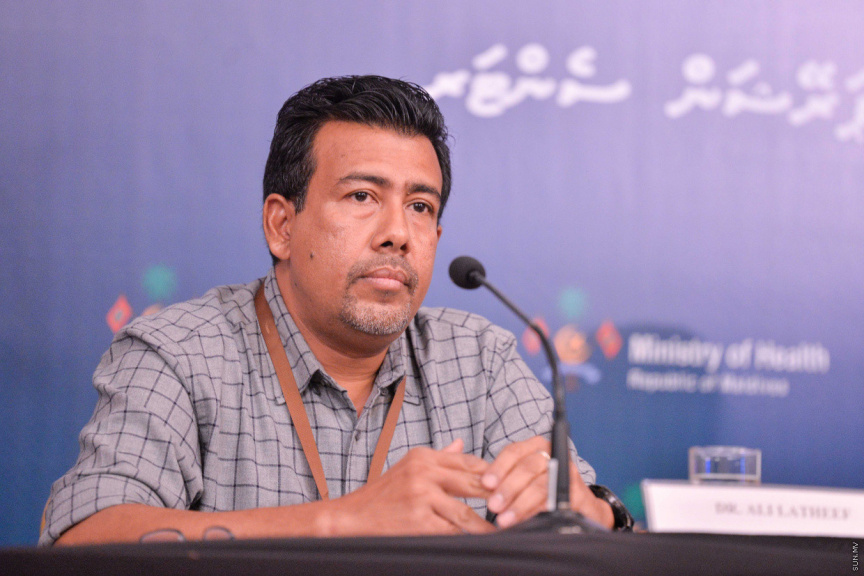 Photo shows Dr. Ali Latheef from IGMH speaking in a news conference regarding the situation with the Covid-19 virus in the Maldives on April 10, 2020. (Sun Photo/Fayaz Moosa)

IGMH doctor and National Emergency Operations Center's edical officer Dr. Ali Latheef has called on Maldivians to accept the gravity and seriousness of the situation with the Covid-19 virus in the country by taking an example from the United States and Italy.

In a news conference tonight, Dr. Latheef said that the gravity of the situation with Covid-19 was best visible from the situations in powerful countries with strong economies such as USA and Italy.

“The first case in the US was identified on January 22. It was an imported case. The local transmission began on February 26. In just one and a half months, the disease was contracted by 400,000 people. That is a huge number. Bigger than our entire population. In this time, 12,700 have died. This is in just a month and a half. The same happened with Italy.” Said Dr. Ali.

The doctor questioned how the Maldives would deal with such a situation if a country with the resources such as USA could not contain the virus.

“From this, it is evident how frightening this is. If the appropriate measures are not taken, and a local spread occurs, no matter how prepared we are, we will have some deaths.” Said Dr. Latheef who added that the authorities were preparing for such a situation with two phases.

“Part of it is for prevention. This includes the instructions issued to the public to remain indoors, closure of offices and schools as well as the curfew implemented. Alongside these measures, work to establish hospitals are also being conducted, since the current hospitals cannot manage if there are a large number of cases.” Said Dr. Latheef.

The doctor stated that the stringent measures implemented in the country was due to the frightening prospect of the virus which is not just a mere thought, but was fully visible from the statistics of other countries.

“This is a very frightening prospect. We would not have thought that all these resorts would be closed three or four months ago and that such a heavy impact would be inflicted on the tourism industry. We are placing so many people in quarantine (both foreign and local) because of the gravity of the situation and which might result in the death of a large number of the population if the right measures are not taken.” Said Dr. Ali.

The pandemic virus has now spread to more than 209 countries across the globe. The highest number of cases infected or dead from the virus are from the United States and Italy. 454,615 cases have been confirmed in the US with 16,074 deaths. Italy has 143,626 cases and 18,279 deaths.

60 ambulances to be procured before end of the year

Everyone, not just the wealthy, want to visit Maldives