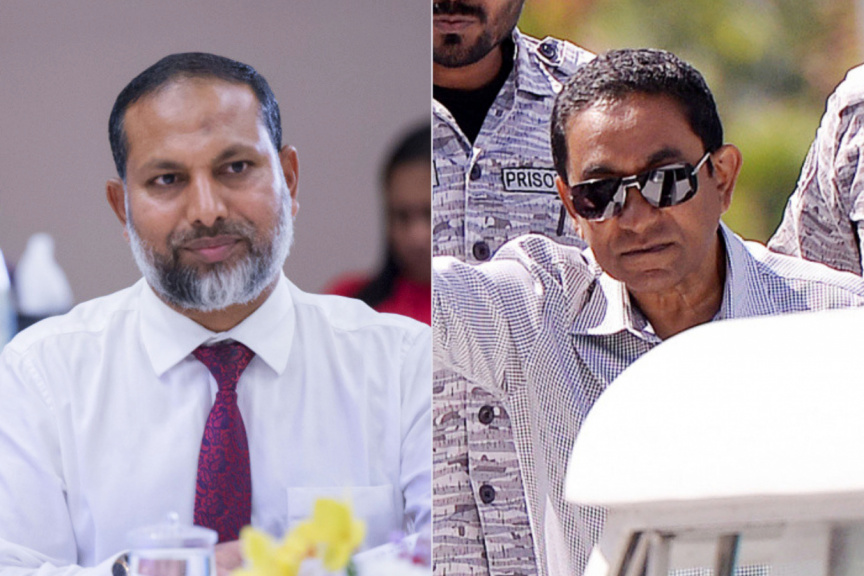 Home minister Imran Abdulla has met with former president Abdulla Yameen who is in jail after being convicted of money laundering, to address concerns of the former president.

The home minister met with Yameen on a visit to Maafushi prison today, and Maldives Correctional Services stated that the minister clarified concerns of the former president during the meeting. Corrections did not provide any further details of the meeting.

The home minister was also joined by Commissioner of Prisons Ahmed Mohamed Fulhu.

A hearing of the appeal case regarding the former president was held in the High Court today at 13:00. Yameen was moved back to jail on Saturday after three days of treatment in IGMH, where a number of medical examinations were also conducted.

The former president had complained of ill health and psychological trauma due to the jail sentence. He is serving a five-year sentence while a fine of USD 5 million was also imposed upon him by the Criminal Court.

The High Court, upon appeal, has previously ruled against the defense’s request to release the former president on bail and suspend the sentence.

Govt. to decide on MVR 2.4M sought by Yameen this week

Yameen: Inmates must be given opportunity to research

'I cannot be touched a next time as well'