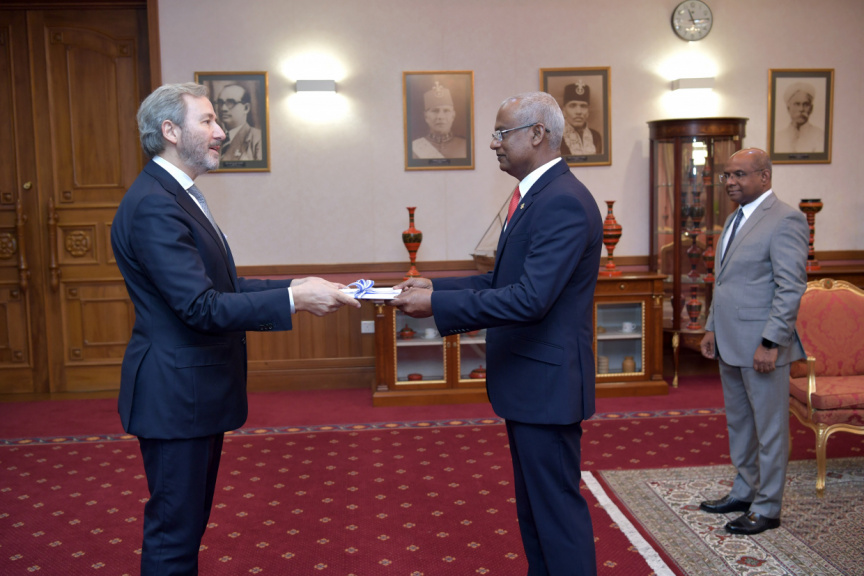 The Ambassador of Greece, Mr Dionyssios Kyvetos, is pictured presenting his Letter of Credence to President Ibrahim Mohamed Solih on January 26, 2020. (Photo/President's Office)

The Ambassador of Greece, Mr Dionyssios Kyvetos, has presented his Letter of Credence to President Ibrahim Mohamed Solih, this morning at the President’s Office.

At the ceremony, the President congratulated Mr Kyvetos on the commencement of his term as the Ambassador of Greece to the Maldives and expressed hope that the positive relations between the two countries will continue to prosper into the future.

Mr Kyvetos stated that it was a privilege to be appointed as the Ambassador to the Maldives, and expressed hopes to further strengthen and diversify existing bilateral relations between the Maldives and Greece.

The President and the Ambassador-Designate discussed issues of concern including climate change and its impact on the preservation of cultural and natural heritage. Mr Kyvetos also noted that he had been briefed on the Government’s strategic action plan and was impressed by the initiatives being taken.

President Solih underscored that tourism is the largest industry in the Maldives and emphasised the interest of the Maldivian Government to explore opportunities to increase tourist arrivals from Greece. He also requested the Greek government’s support in reducing tariffs levied on Maldivian fish exports by European Union nations.

The Ambassador also expressed his wish to further enhance relations between the two countries and assured his full support and assistance during his tenure.