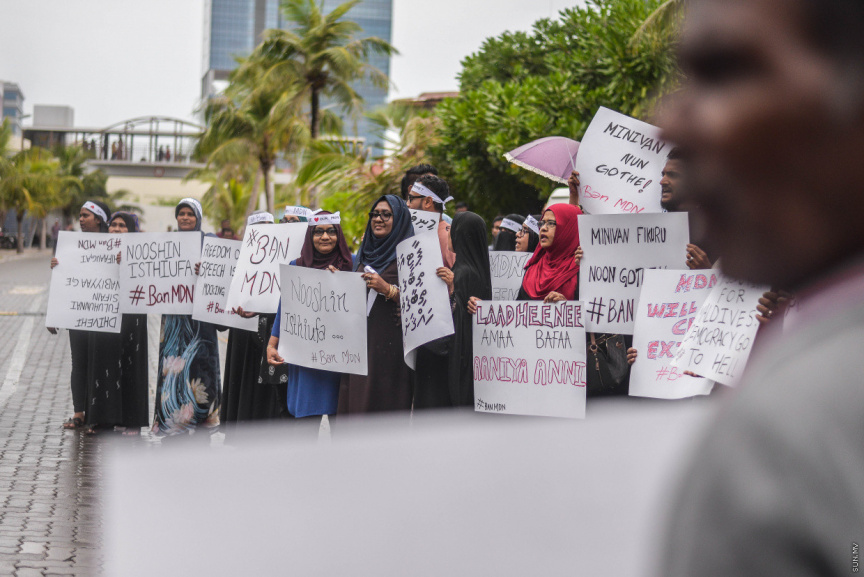 October 25, 2019: Protesters gathered in Rasfannu beach in capital Male' city. The protesters called to to ban and dissolve Maldivian Democracy Network (MDN) which was responsible for a controversial report deemed to have insulted the Prophet Muhammad (SAW) and included rhetoric that went against the tenets of Islam. (Sun Photo/Fayaz Moosa)

The organization was abolished after under The Associations Act article 19 section (A), (B) and article (32).

The move follows months long calls by local Islamic scholars, the opposition, and members of the general public to ban MDN following its controversial publication – Preliminary Assessment on Radicalization in Maldives – which was found to contain blasphemous content which mocks the Islamic faith, the Holy Quran and the Prophet in 2015.

Police investigated the report along with local Islamic scholars and found the report to contain irreligious content in early November. The findings were then brought to the attention of the Youth Ministry, which soon afterward moved to revoke the license of MDN.

Main figures of MDN behind the report including Dr. Azra Naseem and Shahindha Ismail, both who are now living abroad refused to attend to the Police to give statements, citing threats to their lives, after Police issued chits.

Youth Minister Ahmed Mahloof has previously stated that mocking the religion and the prophet was not in line with the right to freedom of expression and speech. Some foreign nations and organizations including Amnesty International, however, have previously called on the Maldivian government to withdraw the decision to revoke the license of MDN.