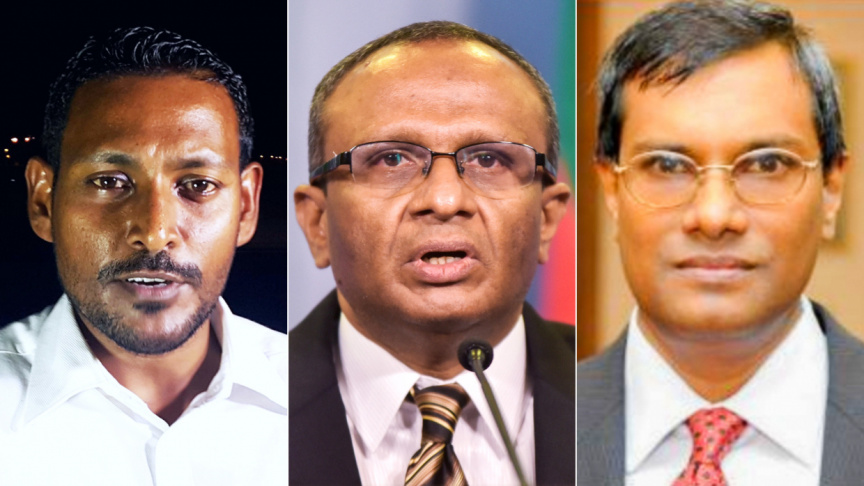 Combined photo of Husnu Al Suood (C), Ahmed Muhthasim Adnan (R) and Hussain Shameem (L). December 2, 2019: A Parliamentary session saw Husnu Al Suood and Ahmed Muhthasim Adnan's names forwarded to the Judiciary Committee after they were nominated for the Supreme Court bench, while the name of Hussain Shameem was forwarded to the vacant post of Prosecutor General.

The nominated candidates for the vacant Supreme Court seats and the post of the Prosecutor General sent by the President have been forwarded to the Judiciary Committee.

These names were forwarded in the Parliamentary session held today and announced by the Speaker Mohamed Nasheed. They include Husnu Al Suood and Ahmed Muhthasim Adnan for the Supreme Court bench and Hussain Shameem for the Prosecutor General. Ahmed Muhthasim is also nominated by the President for the Chief Justice of the Maldives.

The third name by the President nominated for the Supreme Court, Judge Abdul Raoof Ibrahim was withheld by the JSC pending the outcome of three complaints made against him that are under investigation.

The seats on the Supreme Court bench were left vacant after the impeachments of former Chief Justice, Dr. Ahmed Abdulla Didi, and Judge Adam Mohamed Abdulla. The judge who was left in charge of the top court after the impeachments, Judge Abdulla Areef, also retired from the court soon after, citing health issues. Judge Abdul Ghani of the Supreme Court is also under investigation by the JSC and the Anti-Corruption Commission that could possibly see him impeached.

Former Prosecutor General Aishath Bisham’s resignation earlier this week prompted the nomination of Shameem to the post. Bisham resigned after the procedure to remove her was commenced by the Judiciary Committee, which will now be assessing Shameem as her replacement.

These nominees will be assessed and sent to the Parliament where they will be put forward for a vote by MPs.