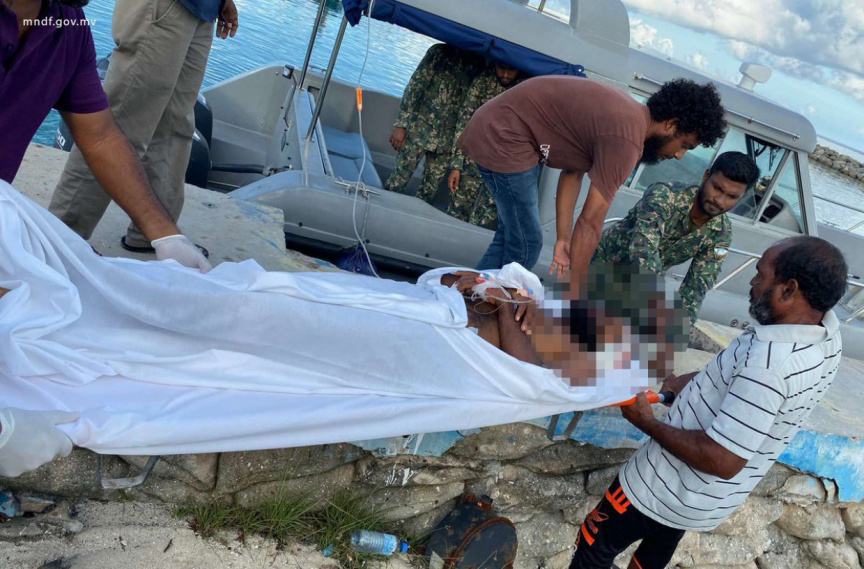 26-year-old man injured in a stabbing is medically evacuated from A. A. Maalhos to Male' City by the MNDF on November 22, 2019. (Photo/MNDF)

Home Minister Sheikh Imran Abdulla says that the attack on a man onboard a sea cucumber fishing boat – in which he was stabbed and thrown overboard – had been carried out by a single assailant, and that the rest of the crew had been asleep at the time.

The attack of board the fishing boat took place in the early hours of Friday, November 22. The crew of the boat, including the victim, are alleged religious extremists. According to the victim, the attack had followed a disagreement between him and the rest of the crew. The victim of the attack, Hammad, 26, from R. Maduvvari, had swum to nearby A. A. Maalhos in his wounded state, from where he received assistance of a couple of locals who heard his cries for help.

He was taken to the Maalhos health center at approximately 3 am, and medically evacuated to the capital, Male’ City, with the assistance of MNDF a couple of hours later.

Imran, who was summoned by the Parliament for a ministerial questioning session this Tuesday, was pressed for an update regarding the case.

In respond to the questions, Imran said that the police investigation into the case pointed to the attack being carried out by a single assailant, and that the suspect in question was in police custody.

The police had arrested its suspect the same day as the attack. Identified only as a 30-year-old man, the suspect was remanded to 10 days in jail by the court on Saturday, November 23.

Sun has been informed through sources within the Maalhos health center, that Hammad, before losing consciousness, said that he was attacked after he refused to take part in something which the rest of the crew had planned. He said that they verbally condemned him to death before stabbing and throwing him overboard.

He is currently under intensive care at Indhira Gandhi Memorial Hospital.

Locals from Maalhos also reported that two strangers showed up at the island after Hammad was taken to the health center claiming to be looking for a ‘missing’ crew member.

However, Imran told the Parliament this Tuesday that the police investigation showed the attack had been carried out by a single assailant.

He also said that there wasn’t any investigative reason for the police to take the fishing boat on board which the crime took place into their custody, and that neither the boat, nor any of the rest of the crew had been taken into custody.

This response didn’t sit well with several parliamentarians who said that the police should be questioning the rest of the crew, and should have the boat in its custody.

Deputy Speaker, North Galolhu MP Eva Abdulla protested that Imran should disclose only factual information to the Parliament. She said that he should simply admit he was not in possession of the necessary information in question instead of lying.

Eva said that it was implausible that the rest of the crew had slept through such a violent attack, and did not believe the police could conduct a thorough investigation with only one arrest.

Police in pursuit of boat used by pro-IS group