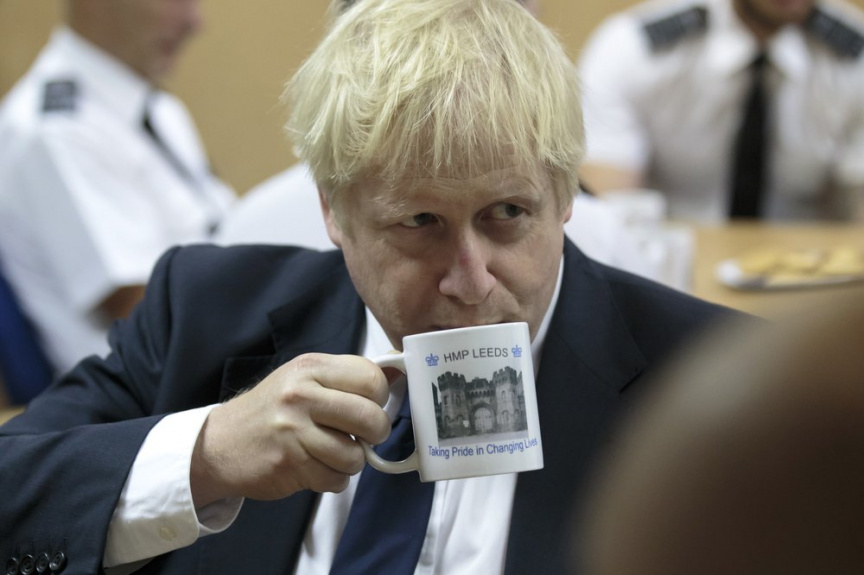 Bolton said after meeting Johnson on Monday that “it might be possible to reach a bilateral agreement very quickly, very straightforwardly” in some areas of trade after Brexit.

Bolton said that “in the Trump administration, Britain’s constantly at the front of the trade queue — or line as we say.”

The comments could be interpreted as a boost to Johnson, who has vowed that Britain will leave the EU on Oct. 31, with or without a divorce deal. Supporters of Brexit say a free trade deal with the United States can help make up for any reduction in commerce with the EU after Britain leaves the bloc’s single market for goods and services.

Johnson said Tuesday that “In the U.S. there are all sorts of opportunities we have to open up trade.”

“We will do a great deal with them and it will open up opportunities for U.K. businesses, and especially service companies, in the U.S.,” he said.

“It will be a tough old haggle — but we will get there,” he added.

David Henig, director of the U.K. Trade Policy Project at the European Centre for International Political Economy, said sectoral trade deals were feasible, along the lines of the U.S.-EU Open Skies agreement on aviation. But he cautioned that grander claims about a trans-Atlantic free trade deal were premature.

“The scope for significant growth in trade from the U.K. side is not great,” he said. “From the U.S. side ... there is scope for a lot more U.S. exports of agriculture” — but those would be controversial in Britain, where many regard U.S., animal-welfare standards as lax.

He said both governments could want a “token” trade deal for political reasons.

“President Trump wants a win before the election next year, Boris Johnson wants a U.S. deal,” Henig said. “So it’s not impossible to see them announcing on Nov. 1: ‘We have a trade deal.’ It might not mean an awful lot. ... The devil, as often, could be in the detail.”

As for Bolton’s “front of the queue” remark — a dig at former President Barack Obama’s 2016 assertion that a post-Brexit Britain would be at the “back of the queue” for a U.S. trade deal — Henig said “it’s not entirely clear that anybody else is in the queue.”

“Most people are trying to avoid having trade deals with the U.S. because they think they’d be disadvantageous,” he said. “We may be the only people actually wanting this, because Trump doesn’t really believe in trade anyway. He’s a ‘U.S. first’ person.”

The value of the British pound has plummeted in recent weeks as the odds shorten on Britain crashing out of the EU without an agreement, an outcome most economists say would cause economic turmoil. Britain’s Parliament has rejected the existing divorce agreement and the EU refuses to renegotiate, so a no-deal Brexit appears increasingly likely.

Pro-EU lawmakers hope to take action in Parliament this fall to block a no-deal departure — either by passing legislation or by bringing down the government, which could lead to an early election.

Johnson has refused to rule out suspending Parliament if legislators try to delay or prevent Brexit. On Tuesday a judge set a hearing next month for an attempt by opposition lawmakers to stop Johnson from bypassing Parliament to force through a no-deal Brexit.

At the Court of Session in Edinburgh, Judge Raymond Doherty said a substantive hearing should take place Sept. 6 on a claim by more than 70 parliamentarians that sending lawmakers home before Oct. 31 would be “unlawful and unconstitutional.”