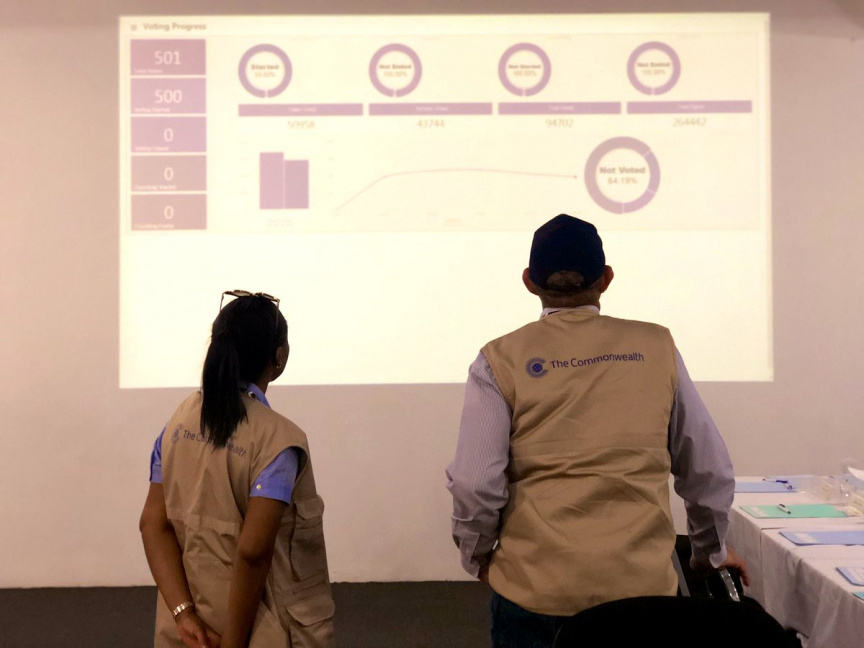 The Commonwealth Observer Group which witnessed the parliamentary elections held in Maldives on Saturday, April 6, has expressed concern over the recurrent practice of misuse of State resources during the pre-election period in Maldives.

Speaking in the press conference held by the Commonwealth delegates this Tuesday, Chairman of the Commonwealth Observer Group, Bruce Golding, said that some of the concerns raised by the previous Commonwealth observers pertaining to the pre-election environment remain relevant.

Golding stated that “allegations of vote buying, misuse of government resources, the need to develop a more effective regulatory framework for campaign financing; and the need to continue strengthening civic education. We will expand on these in our final report and offer recommendations to the relevant stakeholders,”

He stated that their observers were struck by two recurrent views – the need to enhance Maldives’ independent democratic institutions; and to strengthen the rule of law and separation of powers between the judiciary, the executive and the legislature.

He also showed concern for the low rate of women’s political participation in the Maldives. He lighted that only 35 out of 386 parliamentary candidates for this election were women and noted that the outgoing parliament had five women representatives out of 85 members.

He said that they were impressed by the confidence and professionalism of polling officials.

Golding commended the people of Maldives for the peaceful and orderly manner in which the election of April 6, 2019 was conducted.

He stated that the Common Wealth delegations observed that the polls generally opened on time. That the voters’ identification was properly checked and provided with a ballot paper after they were inked, before proceeding to vote.

He highlighted in his speech the presence of representatives from, media, candidates, political parties and citizens at different polling stations.

Golding also stated how impress they were to observe the use of technology both during the polling time and counting the results from all the ballot box stations, including the boxes overseas.

He noted that the access granted by the Election Management Center to members of the National Advisory Committee - a body compromising registered political parties, civil society and a range of relevant stakeholders is good practice.

Golding further encouraged the people of the Maldives to continue to be calm as the country awaits the final result.

“Once again, they have taken a step forward in consolidating their country’s democracy. We challenge the leaders they have chosen to spare no effort in realizing their aspirations,” said Golding.

Saeed confirms his win after recount

EC launches probe into one ballot box at Kendhoo