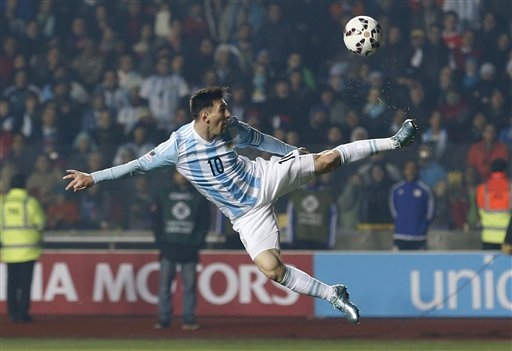 Messi assisted in first-half goals by Marcos Rojo and Javier Pastore and one of Angel Di Maria's second-half goals. The Barcelona star also helped set up the final two goals by Sergio Aguero and Gonzalo Higuain.

Messi showed his brilliant play-making abilities when he beat three defenders — poking the ball through the legs of one of them — in a remarkable run from near midfield that culminated in Argentina's fourth goal by Di Maria.

"We knew the goals would come eventually," Messi said through a translator. "We were playing well, creating chances, and today we finally got all the goals."

Argentina had scored only four times coming into Tuesday's match.

"We are committed to keep playing the same way," Argentina coach Gerardo Martino said. "The team showed precision and efficiency in front of the goal."

Striker Lucas Barrios scored the lone goal for Paraguay, which was trying to reach its second straight Copa America final after losing to Uruguay in the 2011 tournament.

In Saturday's final, Argentina will attempt to end a 22-year title drought to give Messi his first triumph with the national team, while Chile, boosted by the home crowd and its best generation of players in years, will be going for its first South American championship.

Argentina hasn't won a significant trophy since the 1993 Copa America, when Messi was 6 years old. The Argentines were eliminated by eventual champion Uruguay in the Copa America quarterfinals at home in 2011, and lost consecutive finals to rival Brazil in 2004 and 2007.

But Argentina has won the previous four Copa Americas played in Chile — the last in 1991. It's also never lost to Chile in the tournament.

Argentina outplayed Paraguay during most of the match in Concepcion, controlling possession and creating scoring chances from the beginning. The team only struggled for a few minutes before halftime, but came back to crush its rivals in the second half.

"It was a sizable score, but Paraguayans have to be proud of this team, which is continuing to improve," said Paraguay's Argentine coach Ramon Diaz, who took over the squad in December after it finished last in World Cup qualifying. "I am very proud of them, they have been working hard to overcome many things and made it to the last four at this tournament."

Paraguay lost two key players because of injury in the first half — playmaker Derlis Gonzalez in the 26th minute and veteran striker Roque Santa Cruz in the 30th. Gonzalez was crucial in the quarterfinals against Brazil, scoring the equalizer and converting the decisive penalty in the shootout.

"We were playing against the best team in the world," Diaz said of Argentina. "They were better than us in all aspects."

Rojo opened the scoring in the 15th after Messi's free kick into the penalty area. Paraguayan defenders failed to clear the ball and Rojo easily found the net from the six-meter (yard) line.

Messi than set up Pastore's goal in the 27th by feeding him the ball in perfect position for a low shot from the top of the area.

Paraguay pulled one closer in the 43rd when Barrios fired a powerful shot from just outside the area after Argentina defender Nicolas Otamendi erred by trying to move the ball forward with a long pass.

Di Maria added to Argentina's lead just two minutes into the second half after entering the area free of any defenders and scored again five minutes later after Messi's spectacular run past three Paraguayan defenders. Pastore received the pass from Messi, but his shot was saved by Paraguay goalkeeper Justo Villar, and Di Maria found the open net off the rebound.

Messi also started the play that led to the fifth goal, an 80th-minute header by Aguero after a left-side cross by Di Maria. In the sixth, Messi poked the ball forward to set up Higuain's close-range shot in the 83rd.

Messi nearly scored himself with a curling free kick in the 39th that barely missed and also came close in the 68th with a close-range shot that was saved by Villar.

Blatter not traveling to Women's World Cup final in Canada