Blatter not traveling to Women's World Cup final in Canada 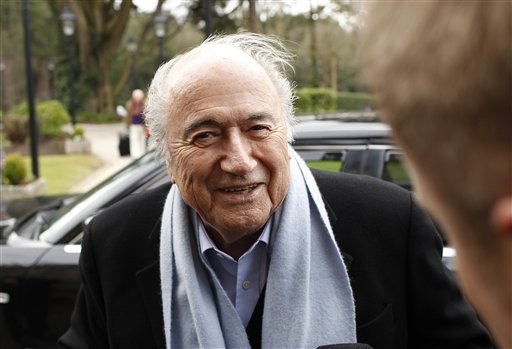 MONTREAL (AP) — FIFA President Sepp Blatter will skip the Women's World Cup final in Canada, avoiding a visit to North America at a time when U.S. officials are pursuing a criminal investigation into the soccer's ruling body.

Blatter's second-in-command, secretary general Jerome Valcke, will also be absent "due to their current commitments in Zurich," FIFA said in a statement on Tuesday.

FIFA Senior Vice President Issa Hayatou of Cameroon will present the World Cup trophy to the winner of Sunday's game, The New York Times reported on Tuesday. A FIFA spokeswoman said an announcement on the trophy presentation would be made "in due time."

U.S. Soccer spokesman Neil Buethe said it would have no comment.

The other commitments mean FIFA's top two officials will avoid a trip to Vancouver, which is about 25 miles (40 kilometers) north of the U.S. border, while American authorities are building a corruption case against members of the governing body.

The United States has indicted 14 men, including nine soccer officials and five marketing executives, and implicated them in widespread bribery and racketeering in organizing competitions in North and South America. Four more men have made guilty pleas.

Three former FIFA executive committee members among the 18 are accused of selling their votes in the 2010 World Cup hosting election to support South Africa's winning bid.

Seven men, including two FIFA vice presidents, have been detained in Zurich and face extradition to the U.S. No charges have been filed against Blatter, but American law enforcement authorities have confirmed he is part of the investigation.

At the same time, Swiss authorities are investigating possible money laundering and criminal mismanagement at FIFA, mainly in the bidding contests which awarded the 2018 World Cup to Russia and 2022 tournament to Qatar.

Switzerland's attorney general, Michael Lauber, has said Blatter is not under suspicion but could be questioned.

Despite the investigations, Blatter was easily re-elected to a fifth term as FIFA president on May 29. Just four days later, under pressure from sponsors, he said he would step down.

The date for a new election will be set at a FIFA executive committee emergency meeting on July 20 in Zurich. The vote for a new president by FIFA's 209 member federations is expected in December or January.

The Latest: Ball boy collapses in heat at Wimbledon