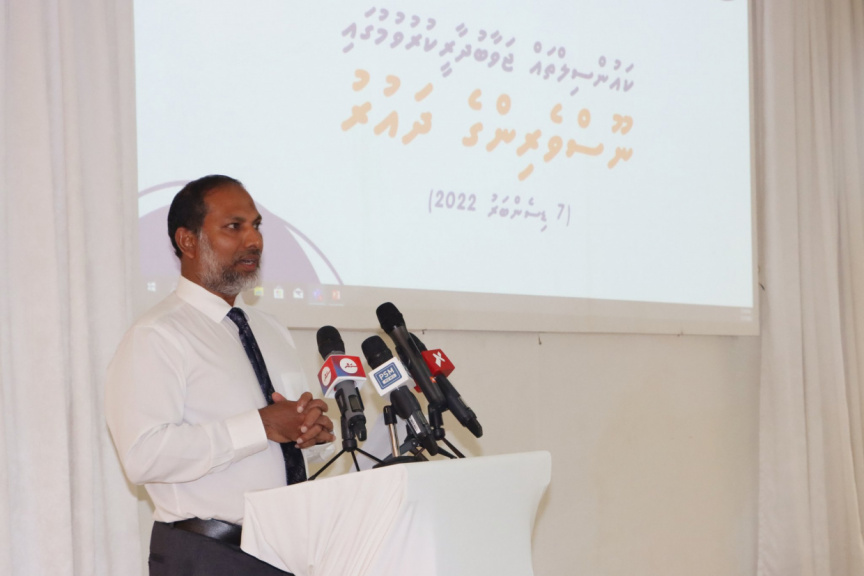 Home Minister Imran Abdulla speaks at the inauguration ceremony of ‘The role of journalists in accountability of local councils’ training program for journalists on December 7, 2022. (Photo/Home Ministry)

Home Minister Imran Abdulla, on Wednesday, emphasized on the importance of decentralizing journalism in order to improve the country’s governance.

He made the remark during the inauguration of a training program conducted by Home Ministry for journalists; ‘The role of journalism in accountability of local councils’.

Speaking at the inauguration ceremony, Minister Imran stressed the need for journalism in the Maldives to be more decentralized than at present. Noting that the decentralization system had been discussed since 2008 – Minister Imran said that the system is strong and expanded during some periods, while it is weakened during others.

Underscoring that some online newspapers and private media are prioritizing current events from atolls, and reporting on them – Minister Imran said that not many discussions have been held within the government regarding the decentralization of journalism. Nevertheless, he expressed hope that the training program commenced today will pave the way to decentralize journalism, and further expand the sector.

“As island councils and atoll councils are bestowed the important role in the governance of the Maldives under the decentralization system – making the councils accountable for the state budget and other matters is something that should absolutely be done by media outlets, through journalists,” he had said.

Minister Imran said that he believes the training program will assist in shaping the journey to decentralize journalism. He stressed that there was no reason for journalists based in atolls to be lower in number than the ones based in Male’ area.

The Minister added that the advanced technology means at present provides much-required easements in reporting from atolls in real-time.

He also pointed out the freedom provided to the press at present.

“It will not be a mistake to say that press freedom in the Maldives has been facilitated to the extent of most democratic nations across the world,” he had said.

Minister Imran also emphasized on the need for journalists to be more responsible in reporting news, and holding authorities accountable. Noting that journalism is practiced in the most developed countries this way – he said that journalists should also be held accountable for false reports.

Probe ordered over death of man in police custody

Police stations to be established at 61 more islands

'Unclear what has to be outed when calling ‘India Out’'

'Will face obstructions when trying to better things'

MEG calls on govt. to provide funds for media outlets