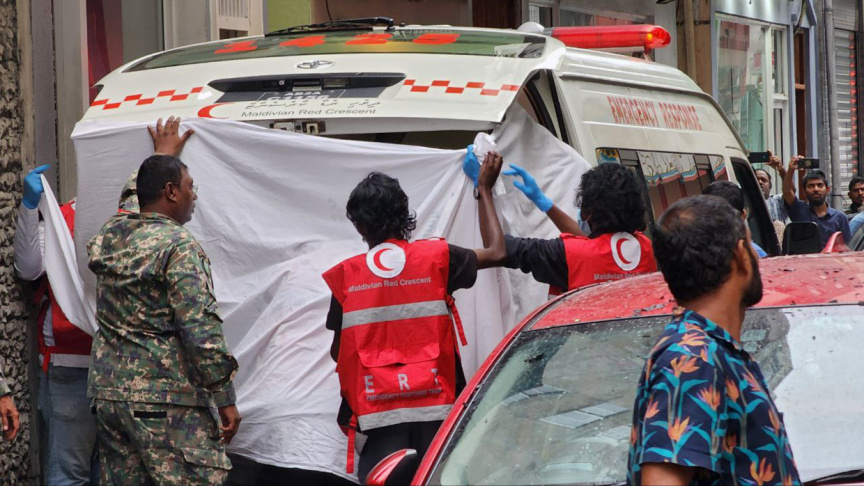 All the bodies of the victims who perished in the fire that occurred in Maafannu district of Male’ City have been flown back home to their families.

Maldives Police Services on Saturday confirmed that all the bodies have been flown back to their respective countries.

While the Indian High Commission in Maldives confirmed in a tweet the bodies of all eight Indian nationals were flown home on November 14, the remains of the Bangladeshi man and woman were returned on Saturday.

Efforts to transport the bodies of the victims of the fire were coordinated by the Maldives Police Service and Maldivian Foreign Ministry.

Sun has come to know that an individual who sustained serious injuries in the incident remains on a ventilator, in a critical state.

On Tuesday, authorities found a human foot during a fire cleanup at Nirufehi. Police have yet to confirm whether the foot belongs to one of the 10 known victims of the fire or another unknown victim.

Notably, the garage is licenced to be operated in Hulhumale’. Police stated that it was being illegally operated in Male’ and that the matter was being probed into.

“Investigative findings show a business registered under the name of the owner of the garage operated out of M. Nirufehi, under the name ASM Garage, and that the business was permitted for operation in Hulhumale’,” said the Head of Death and Homicide Investigation Unit, Inspector of Police Mohamed Samih during a press brief.

However, investigators have yet to determine the cause of the fire.

“Investigative findings establish the fire originated from the garage,” he said.

The investigation into the deadliest fire that occurred in Male’ City remains ongoing.