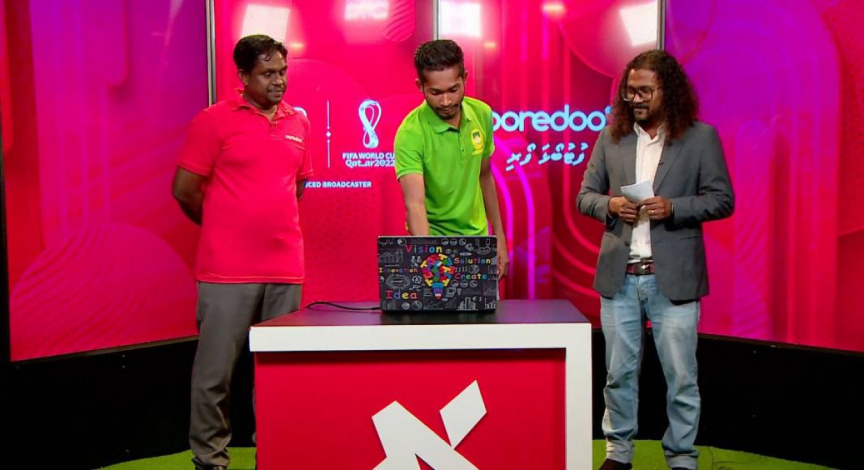 Ooredoo Maldives selects four winners who will get to travel to Qatar to view World Cup. (Photo/Rajje TV)

Telecom giant, Ooredoo Maldives, on Tuesday, announced the four winners who will get to travel to Qatar to watch a semi-final match of the FIFA World Cup Qatar 2022.

‘Ooredoo Football Foari’ campaign’s lucky draw was open to all existing and new customers who were active during the prom period; August 1 to October 31.

The four winners of the lucky draw were selected live on Raajje TV ‘Road to World Cup’ show which aired on Sunday – by key players of Maziya and Vice Chairman Ibrahim Waheed, alongside Ooredoo’s Chief Commercial Officer Hussain Niyaz.

The four winners will receive return ticket to Qatar, accommodation and stadium tickets to watch a semifinal of the World Cup live.

Ooredoo’s CEO, Managing Director Khalid al-Hamadi said that the telecom company has lots of activities planned for customers who will be viewing the World Cup from Maldives.

“With our aim to bring this excitement to Maldives as much as possible, we have a lot of activities planned for our customers who will be watching the matches here in Maldives as well. Together with our partners, we look forward for a colorful and exciting time ahead that would be enjoyable to all ages of people across the nation,” he had said.

The campaign was launched in May, with the aim of enabling Maldivian football fans an exciting and fun World Cup experience.