Yameen: Colonel Nazim, Gasim will be aware of the contents of letter sent to Mauritius 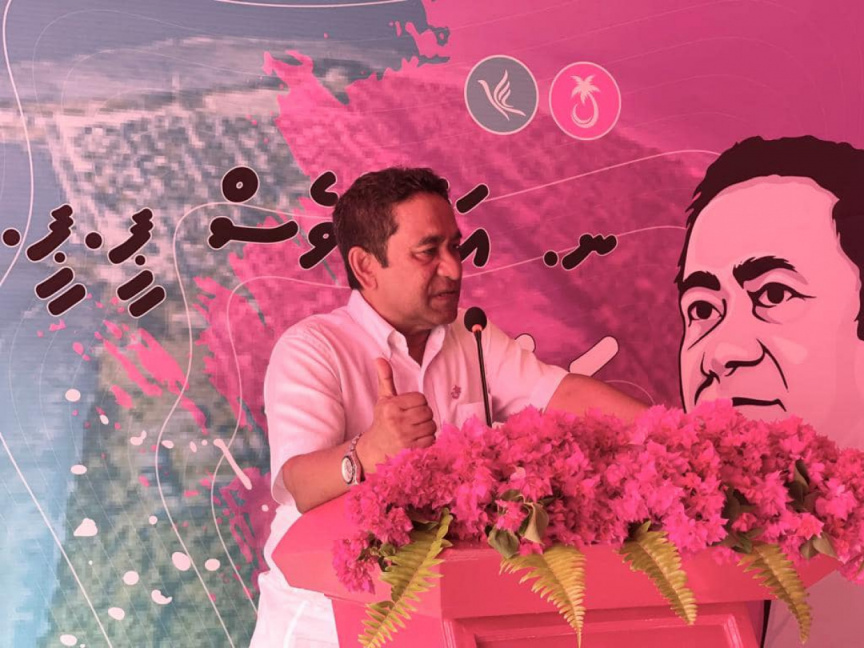 Leader of opposition Progressive Party of Maldives (PPM), former President Abdulla Yameen, on Thursday, has stated that two people that holds the most information regarding the letter sent by President Ibrahim Mohamed Solih to the prime minister of Mauritius regarding the territorial dispute over Chagos Islands are Maldives National Party’s (MNP) leader Colonel (Retired) Mohamed Nazim and Jumhoory Party’s leader Qasim Ibrahim.

Speaking at a rally in N. Manadhoo as part of his ongoing tour of Noonu Atoll – Yameen said that the issue of Chagos Islands blew up over the so-called letter sent by President Solih to prime minister of Mauritius in 2019.

He went onto state that during the timeframe of the alleged letter, the two people who worked most closely with President Solih are Nazim and Qasim. Therewith, he claimed that they both will be well aware of the contents of the letter.

“After Ibrahim Mohamed Solih was elected for presidency, the two people he kept as his closest friends and allies were Colonel Nazim and Qasim. Therefore, they both will be privy to information regarding the letter send in 2019,” he had said.

Yameen said that Nazim’s pledge he would reclaim Chagos Islands to the Maldives if he is elected for presidency is completely baseless.

“We are talking about an issue of international politics. I have no idea how such a land or a country that is lost or has been released over lack of sovereignty can be reclaimed. No idea such a territory released like that can be reclaimed. We do not have the war-capacity such as Russia,” he had said.

Whilst Yameen has made allegations against Nazim and Qasim over the Chagos Islands issue – President Solih, speaking at a ceremony on Wednesday night to mark the day Maldives embraced Islam, said that no discussions have been held any government regarding the Chagos Island issue.

He said that previous Maldivian administrations had in the past carried forward negotiations on the matter with different parties – some with the UK and some with Mauritius.

President Solih said his administration is seeking a resolution to the dispute at the ITLOS and not with any specific country.

The territorial dispute is over an area between the Maldives and Chagos Islands - a group of seven atolls comprising more than 60 islands in the Indian Ocean about 500 kilometers south of the Maldives archipelago.

They also stressed that Maldives’ interests were properly defended in accordance with international conventions and legal principles and decisions before the ITLOS.