Yameen: Will no longer give up so much as a council seat to coalition partners 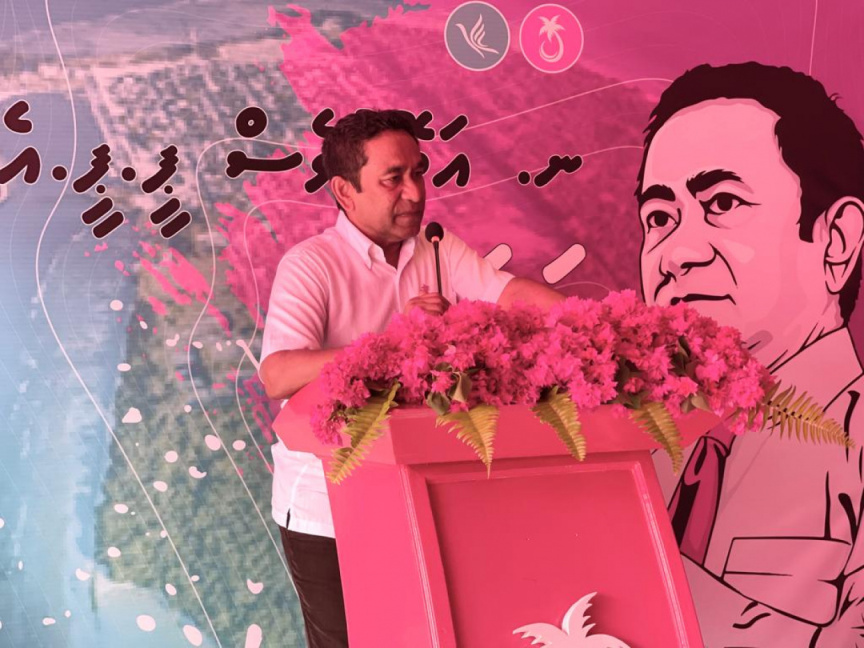 Progressive Party of Maldives (PPM) will no longer give up so much as a council seat to its coalition partners, states the opposition party’s leader, former Maldivian president Abdulla Yameen Abdul Gayoom.

Yameen, who is currently on a tour of N. Atoll, made the remark while speaking at a rally in N. Manadhoo on Thursday morning.

Addressing the rally, Yameen said that political parties that have formed partnerships with PPM in the past have all mislead and betrayed the party.

He said that the super majority that the main ruling party Maldivian Democratic Party (MDP) currently enjoys in the Parliament is the result of the betrayal of Jumhoory Party (JP)’s leader Qasim Ibrahim and other senior party officials.

“We gave up so many seats for them based on the promise they would work with us in politics. In the end Jumhoory Party didn’t win any seats either. And our candidates were denied the opportunity to contend for the seats,” he said.

Yameen said that while Maldives has two political ideologies, JP belongs to neither.

Referring to allegations the current Maldivian administration had shifted its stand in its dispute with Mauritius, risking the loss of a part of Maldives’ exclusive economic zone, Yameen suggested that JP’s leader Qasim and Maldives National Party (MNP)’s leader Colonel (Retired) Mohamed Nazim had a hand in the shift in the government’s stand.

“Wasn’t it done with their involvement? Doesn’t this stem from a letter the president sent to Mauritius in 2019? Where was Nazim then? Where was Qasim? Why are talking about it now? Qasim and Colonel Nazim were President Solih’s strongest allies back then,” he said.

Yameen alleged both Nazim and Qasim knew about the contents of the letter – in which President Ibrahim Mohamed Solih informed the Mauritius Prime Minister that Maldives would Maldives would vote in favor of the Chagos decolonization resolution in the UN General Assembly.

Criticizing Nazim, Yameen asked how he would fulfil his promise he would reclaim Foalhavahi (Peros Banhos – an atoll in the Chagos archipelago which historical documents show Maldives once claimed as part of its country - if he came to power.

“We are talking about an international political matter. I don’t understand how it’s possible to reclaim a land we lost, a land we let slip from our fingers due to political inadequacies. We don’t have the military prowess that Russia possesses,” he said.

President Solih’s administration insists that the decision by Maldives to vote in favor of the Chagos decolonization resolution and the ongoing dispute at the International Tribunal of the Law of the Sea (ITLOS) concerning the delimitation of the maritime border between Maldives and Mauritius are two separate issues and that the vote will have no effect on the dispute.

The territorial dispute between Maldives and Mauritius is over an area between the Maldives and Chagos Islands - a group of seven atolls comprising more than 60 islands in the Indian Ocean about 500 kilometers south of the Maldives archipelago.

Mauritius lodged the case with the ITLOS under the UN Convention on the Law of the Sea in 2019.

Abdulla’s family plead to have his body returned